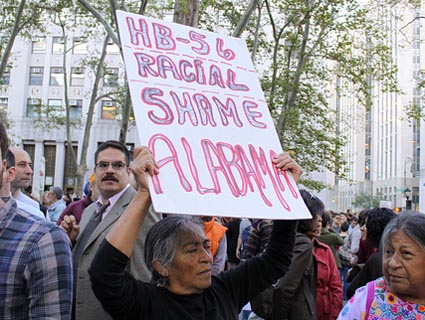 Undocumented immigrants in Alabama are fighting back against the state’s harsh immigration law—by getting organized.

Last weekend, pro-immigrant activists from the South and beyond headed to the poultry-processing hub of Albertville, located some 75 miles northeast of Birmingham, for a workshop meant to help Alabama’s immigrant communities deal with HB 56, the restrictive law that has drawn comparisons to (and in some ways surpassed) Arizona’s SB 1070. Albertville, home to many undocumented Latino immigrants who work at local Tyson, Pilgrim’s Pride, and Wayne Farms plants, has become a hotspot for immigrant organizing.

Check out MoJo contributor Paul Reyes’ take on HB 56 (“A State Without Mexicans?”), as well as additional reporting on the Alabama immigration law here and here.

The workshop, sponsored by the National Day Laborer Organizing Network and the Southeast Immigrants Rights Network (SEIRN), was based on the Barrio Defense Committee model first introduced in Arizona last year. The idea is simple: train communities to communicate better, know their rights, and have a plan in place should an immigration raid occur. According to NDLON’s Marisa Franco, the trainings are all about “lifting up these people’s courage.” “These laws unleash the ugliest part of this country,” she said. “It really opens the door for people to treat each other in a really horrible way. We want to create a space for people to find each other and know 1) we’re not alone and 2) we actually have some ways to defend ourselves.”

Mónica Hernández, a SEIRN organizer, said that although HB 56 is exceptionally tough—for example, it already has led to the arrest of US citizens and kept undocumented immigrants from using public utilities—it is part of a larger trend of targeting immigrants in the South. As the region has seen a surge in its Latino population during the past decade, the demographic shift has coincided with the passage of similar immigration laws in Alabama, Georgia, and South Carolina.

That’s why, on top of door-knocking campaigns in Albertville’s numerous trailer parks, the weekend included talks about issues that have come up in other Southern states, including improving the links between immigrants and the African American community—a relationship that, according to Hernández, “is complicated by issues of economic justice.” Still, she said, “here in Alabama we’ve seen, particularly since the passing of HB 56, an incredible amount of support from African American leaders, who see this as a very detrimental policy, not only for the immigrant community, but for people of color, in general.”

The workshop also gave participants like 19-year-old Victor Palafox a chance to see what was happening on the ground in places like northeastern Alabama. Just a couple of months ago, Palafox, his younger brother, and his parents were planning on moving from Birmingham to Seattle; as undocumented Mexican immigrants, the family had no intention of sticking around for HB 56 to go into effect.

But as the date approached, they started to see how little support their fellow immigrants had in facing the new legislation. So instead of leaving, the Palafox family decided to stay and help in any way they could. “These are my people,” Palafox said. “This is my community. This is my city. And in the end, what happens to them happens to me.”

In Albertville, Palafox worked with students and educators, a particularly important role given the increased absenteeism of Latino students throughout the state since HB 56’s passage. He made the hour-and-a-half trip knowing—like the workshop’s other undocumented participants, some of whom traveled from out of state—that he should keep a low profile. After all, the law made it a misdemeanor to not have immigration papers, and US District Judge Sharon Blackburn recently ruled that federal law doesn’t prohibit state and local police from checking the immigration status of suspects pulled over by police.

Still, Palafox was undeterred. “I get a lot of people who ask me, ‘Aren’t you afraid? Why are you so outspoken?'” he said. “And the response I always give them is: ‘Now is not the time to be quiet. Now is not the time for faint hearts.'”