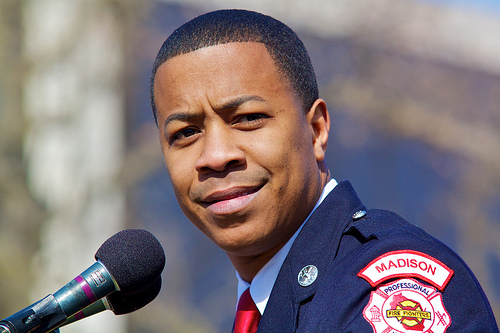 You couldn’t miss Mahlon Mitchell at this winter’s populist uprising in Madison, Wisconsin. Mitchell, president of the Professional Firefighters of Wisconsin, gave impassioned speeches on the steps outside the state Capitol in defense of workers’ rights, and he led firefighters in a march into the rotunda to roaring cheers from the protestors. Mitchell’s role in the protests catapulted him into something of a celebrity among union members and activists in Wisconsin, especially considering that firefighters were exempted from Gov. Scott Walker’s anti-union budget repair bill.

Now Mitchell is eyeing a bigger stage: the governor’s mansion. In an interview with Mother Jones, he said he was “seriously considering a run” for governor in a potential recall election targeting Walker. He said he believes Wisconsinites are sick of professional politicians not following through on campaign promises, and that a populist candidate running against Walker stands a better chance of unseating the governor. The ideal candidate would be “able to talk with common people about common issues,” Mitchell said. “Tell ’em what you can do and what you can’t do.”

Union leaders and state politicos had already approached him about running against Walker in a recall election, Mitchell explained. He also said he’d recently formed an informal committee to test the waters about a recall candidacy, but stressed he had yet to decide one way or the other. “It’s a decision I’ll make very soon,” he said.

Graeme Zielinski, a spokesman for the Democratic Party of Wisconsin, said the party isn’t commenting on specific candidates. “We have a strong stable of candidates, all of whom would be a worthy alternative to Scott Walker,” he says. As for Mitchell, Zielinski praises the union chief for having been “on the front lines in the fight against Walker. Mitchell has been there from the get-go, standing with the people.”

Anti-Walker groups will begin the recall effort—sparked by Walker’s attack on collective bargaining rights for most public-sector unions and the subsequent protests that engulfed Madison in February and March—on November 15. Organizers have two months to collect more than 540,000 signatures to trigger a recall election, but the grassroots coalition United Wisconsin says it hopes to gather more than 700,000. If they succeed—which many politicos, including the chair of the Wisconsin GOP, believe will happen—the actual election will likely take place in late April or early May 2012, say Democratic and union sources. Democrats hope to announce a challenger to Walker in the next month; potential candidates include former US Rep. David Obey, Milwaukee mayor Tom Barrett, Rep. Ron Kind, former assistant attorney general and Dane County executive Kathleen Falk, and state Sen. Jon Erpenbach.

A recent Public Policy Polling survey of Wisconsinites showed that 48 percent of respondents favor recalling Walker and 49 percent do not. Walker’s approval rating was 47 percent, while 51 percent disapprove.”Voters aren’t as angry with him as they were earlier in the year,” said PPP president Dean Debnam, “and if Russ Feingold’s really out of the mix there’s not an obvious Democrat to pit against him.” However, Democratic pollster Paul Maslin dismissed that polling, saying Walker remains vulnerable and has a short window of time to convince voters that his policies are working. “I have full confidence that the voters are not afraid of [recalling Walker],” Maslin says. “People come up to me and say, ‘It can’t happen, can it?’ I say, ‘You’re underestimating the people in this state.'”

Mitchell’s name rarely surfaces in discussions of possible Walker challengers, partly because he lacks political experience. A lieutenant in the Madison Fire Department, Mitchell was elected president of the Professional Firefighters of Wisconsin earlier this year. He’s the youngest and first black person ever to hold the position. “It’s time for a change,” he told me. “Time for us to get back to issues—Wisconsin first, everything else second.”