Lebanon’s brutal civil war may have officially ended more than two decades ago, but the battle to define its roots and meaning continues…on Wikipedia.

As I discovered while reporting this story on Mitt Romney’s Middle East policy adviser Walid Phares, the Wiki pages of major groups, events, and figures in Lebanon are under constant revision by partisans on all sides. Phares’ page was a particular hotbed of activity, which was strange, given that his role was in the Lebanese Forces was mostly unreported by the Western media and, unlike his former associate Samir Geagea, he doesn’t play an ongoing role in Lebanon’s domestic political drama. Many other actors from the war still do, which is part of why there’s so much activity on their pages and so much disagreement about what to include.

At any rate, take a look at the pace of revisions and counter-revisions that have taken place on Phares’ Wikipedia page just since my story was published Thursday morning, and even over the past month: 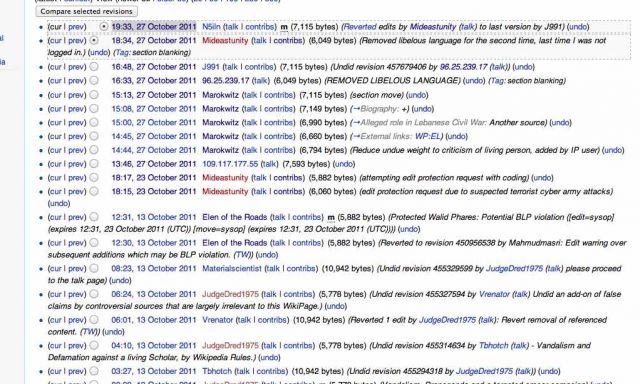 There have been nearly a hundred edits to Phares’ Wikipedia page during October alone, most involving his relationship to the Lebanese Forces; the edit wars on his page go back to 2005. His defenders frequently scrub the page of any lines referring to that relationship (some of which really have been inaccurate and inflammatory). It’s not clear that the users are actually different people. After TEOS2011 was flagged as a possible sock-puppet, another user, JudgeDredd1975 (who has an extraordinary knowledge of Mr. Phares’ bibliography), showed up to defend TEOS2011 writing, “I have no idea who is TEOS2011, although we apparently share the same values of keeping Wikipedia’s integrity by not letting it become a platform for cheap defamation[.]” Both JudgeDredd1975 and TEOS2011, among other users editing Phares’ page, have a limited interest in Wikipedia: Their only revisions have been to Phares’ page.