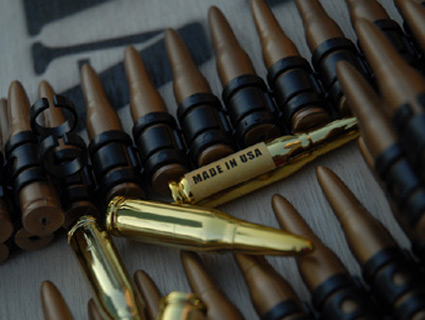 In February, Sen. Rand Paul (R-Ky.) sent out an urgent message to his supporters. The subject was the United Nations Small Arms Treaty, a pact under consideration by the UN that would wipe out Americans’ Second Amendment rights. If it were to be ratified by the Senate, Paul wrote, it would allow the government to “CONFISCATE and DESTROY ALL ‘unauthorized’ civilian firearms.” And that would be just the beginning. Once implemented, the treaty it would mandate that all guns be registered with the international body, paving the way for “full-scale gun CONFISCATION.”

Only there’s no such thing as the UN Small Arms Treaty. The senator was broadcasting unfounded propaganda being disseminated by an extreme gun group.

Paul was writing on behalf of the National Association for Gun Rights, a Second Amendment organization that considers the National Rifle Association too moderate. The two have a mutually beneficial relationship: NAGR endorsed Paul and donated $1,000 to his 2010 campaign through its political action committee; in September, Paul sent out another email blast, this time to shill for the organization’s “Frontline Defenders” newsletter, which serves as a fundraising tool for the NAGR. “There’s an all-out WAR going on for our gun rights,” the newsletter warned, reprising, once more, the specter of a “Small Arms Treaty” bent on mass confiscation.

Fears that shadowy international forces are coming for your guns are a proud tradition on the far right, but rarely are such conspiracy theories echoed by someone with as much influence as Paul. If only it were true. While the UN will consider an Arms Trade Treaty next summer, full-scale confiscation is not on the agenda. Rather, the treaty is aimed at preventing conventional weapons from ending up in the hands of terrorists and other hostile groups.

“They show next to no understanding of how international law works in the context of the United States Constitution,” Fidler says.

The Arms Trade Treaty was first floated in 2006. But the Bush administration publicly opposed the plan, so the treaty sat on ice. When President Obama took office in 2009, he changed course, and that spring Secretary of State Hillary Clinton announced her support for a sweeping treaty on conventional arms—at least in principle.

That was enough for gun rights activists to sound the alarm. A Washington Times editorial warned that the treaty, if ratified, “would necessarily lead to confiscation of personal firearms.” John Bolton, Bush’s ambassador to the United Nations, declared that it would allow the Obama administration to secure the kind of sweeping gun control regulations it could never achieve legislatively. One chain email alleged—falsely—that the treaty had already been signed by Secretary of State Clinton and needed only an up-or-down vote from the Senate. Even Chuck Norris joined the fray, penning a Politico op-ed arguing that the Arms Trade Treaty was part of the Obama administration’s “utopian vision of global disarmament.”

But despite Paul’s warnings, there’s nothing to suggest that any of his or his allies’ fears will come to fruition. For one thing, Clinton included a key caveat designed to stop any treaty from trampling over Americans’ interests: The rules would be drafted by consensus, rather than democratically. In other words, if any proposal infringed on Americans’ constitutional rights, it could be nixed in committee. The 2009 General Assembly resolution that set the treaty drafting in process in motion also put the powers of enforcement in the hands of individual countries and not the international community:

Even if Clinton agreed to a treaty that dramatically curtailed Second Amendment rights, it would still need to be ratified by a two-thirds majority in the Senate—an impossibility in today’s political climate. Should all else fail, there’s one last line of defense that conservatives can take comfort in: the Constitution. Any set of new regulations that infringe on Second Amendment rights would almost certainly be struck down by a Supreme Court that has dramatically expanded the scope of the Second Amendment in recent years.

“Most of the people that get all worked up about, or that might have done Rand Paul’s ‘Official Firearms Sovereignty Survey,’ 99.9 percent of the time [they] believe the United Nations is a toothless, worthless, empty instrument that does nothing but produce hot air,” Fidler says. “But all of a sudden, it becomes this monster that’s gonna come in your home and take away your hunting rifle.”

This would not be the first time the Kentucky tea partier has fallen for a fringe conspiracy theory. While campaigning for his father’s presidential campaign in 2008, he told an audience in Montana that the federal government was considering plans to build a “NAFTA superhighway” connecting the United States, Mexico, and Canada, and paving the way for a North American Union. (Paul’s office did not respond to requests for comment.)

“There have always been organizations and politicians that have attempted to stoke up fears of some kind of apocalyptic nightmare where American politicians sell the country out to some international organization like the UN and those scenarios may make interesting horror movies, but they don’t bear any kind of relationship to reality,” says Roger Williams University law professor Carl Bogus. “Serious people don’t worry about them.”