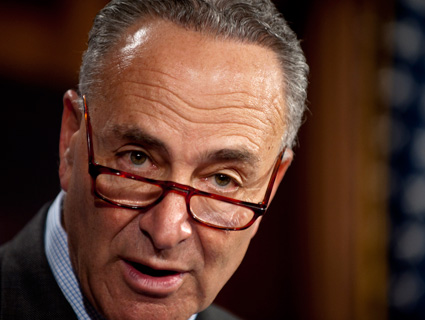 Democrats appear to have all-but-conceded defeat on President Obama’s $447 billion jobs bill, which calls for new spending on construction and tax incentives for hiring. It also includes 5.6 percent surtax on people making over $1 million a year.

But there’s a Plan B, as Politico reports. Senate Democrats have begun drawing up a series of smaller bills that could actually pass Congress. Senate Majority Leader Harry Reid (D-Nev.) plans to bring a number of trade agreements to the floor, as well as a bipartisan bill to push back against Chinese currency policies.

But Sen. Chuck Schumer (D-NY) wants to bring another, discredited notion back to the table: a tax holiday for corporations to bring home their overseas profits, an idea known as repatriation. Schumer’s hope is to couple this with a plan for a national infrastructure bank (which Republicans hate). Schumer’s thinking here is that marrying a GOP hobbyhorse like the repatriation holiday to a Democratic winner like an infrastructure bank is a surefire recipe for success.

There’s a serious problem with tax repatriation holidays: They don’t work, as Jared Bernstein, a senior fellow at the Center on Budget and Policy Priorities and former economic advisor to Vice President Joe Biden, explained back in June:

• Repeating the tax holiday would increase incentives to shift income overseas. If Congress enacts a second tax holiday, rational corporate executives will conclude that more tax holidays are likely in the future. That will make corporations more inclined to shift income into tax havens and less likely to make investments in the United States.

• The claim that a tax holiday would increase domestic investment by freeing multinationals from cash restraints is extremely dubious. U.S. non-financial corporations currently have $1.9 trillion in cash and other liquid assets, the highest level as a share of total corporate assets since 1959. The ten companies lobbying hardest for a new tax holiday alone have at least $47 billion in cash and other liquid assets that could be used for domestic investments—without triggering additional tax liability.

• Some of the biggest beneficiaries of a tax holiday would be firms that have aggressively shifted income overseas. Companies in the technology and pharmaceutical industries have been particularly aggressive in shifting income abroad because they rely on intellectual property, which is relatively easy to shift to other countries as a tax avoidance strategy. Half of all repatriations from the 2004 tax holiday came from companies in these two sectors alone. The same corporations and sectors would stand to benefit disproportionately—and enormously—from a second tax holiday.”

Repatriation rewards corporations for hoarding cash and dodging US taxes, and sets a dangerous precedent for future tax holidays.

If Schumer’s using the tax holiday proposal to bring Republicans to the table, then okay; but it’s a dangerous carrot to dangle, and it sets the stage for an even more prolonged economic malaise.