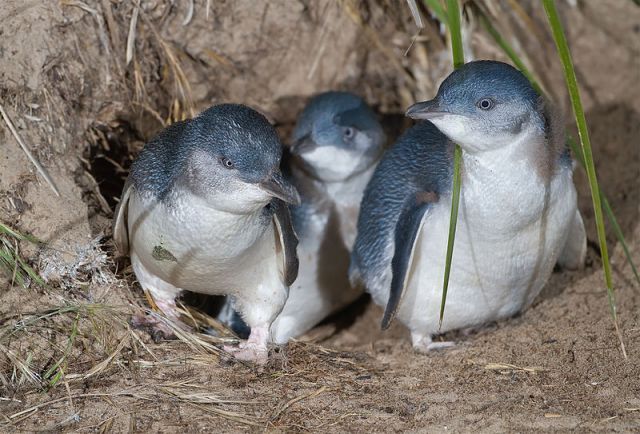 A family of little blue penguins, Eudyptula minor, exit their nest burrow.: Credit: Noodle snacks via Wikimedia CommonThe New Zealand Herald reports the country is facing one of its worst ecological disasters as the stricken tanker Rena is now in danger of breaking apart. The ship grounded 20 kilometers/12 miles off Tauranga Harbour on the North Island after striking a reef on Wednesday.

The Rena is carrying 1,700 cubic meters/450,000 gallons of heavy fuel oil. The race is onto siphon off—or at least contain—the oil before the ship sinks. From the New Zealand Herald:

More resources and special equipment [are] likely to be needed during the operation. An offshore boom barrier device to ring-fence the oil—measuring about 1250m [three-quarters of a mile]—was being transported from Australia along with three heavy skimmers to scoop it from the water. A salvage architect was due to arrive from Holland, with further expert help from the Australian Maritime Safety Authority also on their way. 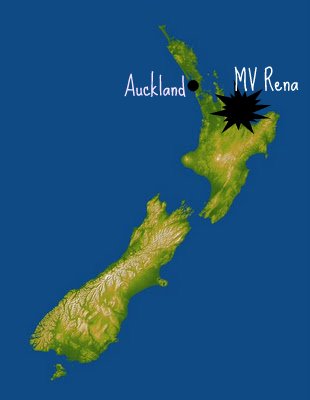 Site of the grounding of the MV Rena, off the North Island of New Zealand. : Satellite image courtesy of NASA/JPL/NGA.

Meanwhile, heavier weather is bearing down on New Zealand, including a forecast for rain and strengthening northeasterly winds on Monday—when the pumping operation is slated to begin.

Most worrisome, it’s spring in the southern hemisphere, and many seabirds along New Zealand’s coast are breeding. This is prime egg-laying/chick-hatching season for little blue penguins (called fairy penguins in Australia), who come ashore en masse each dusk to exchange incubation duties or feed their chick, before departing again en masse before dawn to hunt.

(The sound of little blue penguins calling at dusk in New Zealand. Credit: Benchill (Own work) [GFDL or CC-BY-3.0], via Wikimedia Commons.)

“It’s a very difficult situation and the reality is that we are going to see a significant oil spill,” [Transport Minister Steven] Joyce said. “So far it’s been reasonably small, so I think everybody’s preparing for the worst. We are dealing with a very serious situation … and I don’t think anybody is under any illusions.”

Cookie, the ticklish little blue/fairy penguin at the Cincinnati Zoo, is a great ambassador for his kind—who may not be so well known on distant shores.