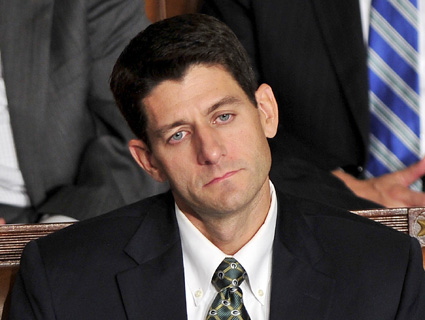 Over the weekend, Politico ran a story reminding us that Rep. Paul Ryan (R-Wisc.)—you know, the serious, adult, courageous, wonky, Republican hero of Medicare-privatizing, Medicaid cost-shifting fame—is still around, and has opinions:

Ryan said he is committed to taking on the president’s “class warfare” rhetoric—dark passions he thinks President Barack Obama is trying to gin up among voters as he bids for a second term as commander in chief.

“The rhetoric is what I think is really dangerous because the class warfare rhetoric, it speaks to bad emotions within people,” Ryan said in an interview. “It speaks to dark emotions—anger, envy, fear—those are powerful emotions, and I suppose they can be manipulated to good political ends, but it’s reckless, in my opinion, and it divides people.”

It’s true that Obama seems prepared to make 2012 about protecting working class Americans and making the rich poney up some extra tax dollars. But the president’s rhetoric, infused with urgent calls to close the yawning inequality gap through a more equitable tax structure, hasn’t masked that fact. Of course Obama is playing politics by placing a tax hike on the rich at the center of his legislative and electoral strategy. Raising taxes on the rich is popular. At least Obama hasn’t been afraid to call his plan what it is.

Meanwhile, Ryan continues to talk as if his undeserved enlightened reformer-halo puts him above the political fray. But screwing over poor people could be called “class warfare,” too. Ryan’s budget plan featured $771 billion in cuts to Medicaid spending and slashed $750 billion from a host of other programs serving low-income Americans. Overall, those reductions comprised almost two-thirds of the $4.5 trillion in cuts his plan would have enacted over the next ten years, according to the Center on Budget and Policy Priorities.

If Ryan is going to be stepping back into the spotlight through interviews like the one he gave Politico, he should be ready to explain how his vision of America is any less political, reckless, and divisive than Obama’s.