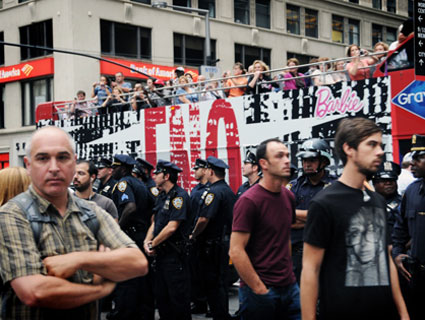 Every good movement needs a bus. Rosa Parks had one. Ken Kesey had one. Even freegan climate activists who get around on French fry grease have one. So why not Occupy Wall Street? After all, a bus passes Zuccotti Park every minute or so. It’s most often red, double-decker, and crammed with tourists, admittedly, but at least the seats are comfortable. Or so I was thinking on Sunday as I stood in line on Broadway behind a kid with a foam Statue of Liberty crown, waiting to get aboard.

I sat down in the back between a burly Australian and a skinny German. Neither had much to say about Occupy Wall Street. Two large women in front of me whom I’d figured for Americans were actually Canadian and didn’t have any opinions either. So I moved to a front row and sat down next to someone who, it turned out, didn’t speak English. But at least I was close to the tour guide, Thomas Kinzey, a man with wraparound sunglasses, a stubble, and a penchant for numbers. “Tower No. 4 will house the mausoleum, the chapel, the visitors center of the 9/11 memorial,” he was saying. “The mausoleum will house the 14,000 body parts that remain unclaimed due to contaminated DNA.”

Kinzey looked ahead. “Coming up, the thousands of people that you see in the park here are the anti-Wall Street demonstrators.” Cameras clicked as he went on, getting the details slightly wrong: “Two weeks ago this demonstration started with 50 people sleeping in the park. It has now grown to 5,000 through the Wall Street area. Over 1,000 people have been arrested to deter the demonstration, and all it does is cause it to grow.”

“It is now estimated to be at least 5,000 strong,” he repeated, emphasizing the last word.

We rolled through a green light and continued down the street, leaving the drums and chants behind. Kinzey pointed out the city’s oldest church before quickly adding, “Look to your left: One of the most famous streets in the world—Wall Street, ladies and gentlemen, home to the New York Stock Exchange and Federal Hall.” That was all the love it got.

I turned to the fashionably dressed woman sitting behind me. Her name was Nooshin Sham, and she hailed from Iran. Sham claimed she’d never heard of the “Arab Spring,” but she did know that revolutions had taken place in other Middle Eastern countries. She saw no overlap between them and the demonstration in the park. “That’s way, way more violent than this,” she said. “It’s like a different planet.”

My seat was starting to feel a bit too comfortable, so I got up to disembark. On my way down the stairs I asked Kinzey for his own take on the Wall Street occupiers. “I’m for it, sir,” he said. “I’m totally for it. You heard my speech.”