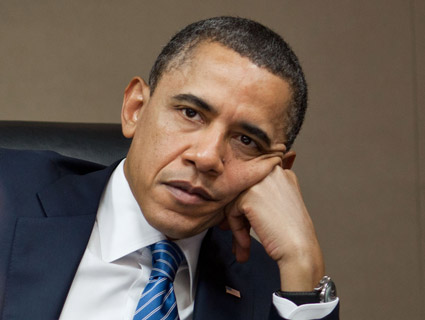 For connoisseurs, Barack Obama’s fundraising emails for the 2012 election campaign seem just a tad forlorn—slightly limp reminders of the last time ‘round.

Four years ago at this time, the early adopters among us were just starting to get used to the regular flow of email from the Obama campaign. The missives were actually exciting to get, because they seemed less like appeals for money than a chance to join a movement.

Sometimes they came with inspirational videos from Camp Obama, especially the volunteer training sessions staged by organizing guru Marshall Ganz. Here’s a favorite of mine, where a woman invokes Bobby Kennedy and Cesar Chavez and says that, as the weekend went on, she “felt her heart softening,” her cynicism “melting,” her determination building. I remember that feeling, and I remember clicking time and again to send another $50 off to fund that people-powered mission. (And I recall knocking on a lot of New Hampshire doors, too, with my 14-year-old daughter.)

It’s no wonder, then, that I’m still on the email list. But I haven’t been clicking through this time. Not even when Barack Obama himself asked me to “donate $75 or more today to be automatically entered for a chance to join me for dinner.” Not even when campaign manager Jim Messina pointed out that, though “the president has very little time to spend on anything related to the campaign… this is how he chooses to spend it—having real, substantive conversations with people like you” over the dinner you might just win. (And if you do win, you’ll be put on a plane to “Washington, or Chicago, or wherever he might be that day.”)

Not even when deputy campaign manager Jen O’Malley Dillon offered to let me “take ownership of this campaign” by donating to it and, as an “added bonus,” possibly find myself “across the table from the president.” Not even when Michelle lowered the entry price from $75 to $25 and offered this bit of reassurance: “Just relax. Barack wants this dinner to be fun, and he really loves getting to know supporters like you.” Not even when, hours before an end-of-September fundraising “deadline,” Barack himself dropped the asking price to three dollars. God, have a little self-respect man! Three dollars?

Here’s the thing I’m starting to think Obama never understood: yes, for most of us the 2008 campaign was partly about him, but it was more about the campaign itself—about the sudden feeling of power that gripped a web-enabled populace, who felt themselves able to really, truly hope. Hope that maybe they’d found a candidate who would escape the tried-and-true money corruption of Washington.

None of us gave $50 hoping for a favor. Quite the opposite. You gave $50 hoping that, for the first time in a long while in American politics, no one would get a favor. And the candidate, it must be said, led us on. His rhetorical flights were dazzling—to environmentalists like me, he promised to “free this nation from the tyranny of oil once and for all,” and pledged that his administration would mark the moment when “the rise of the oceans began to slow and our planet began to heal.”

Once in office, it was inevitable that he’d disappoint us to some degree. In fact, we knew the disappointment would come and braced ourselves for it. After all, our movement was up against the staggering power of vested corporate and financial interests. It’s hard to beat big money. Still, we didn’t mind thinking: Yes, we can. We’ll work hard. We’ve got your back. Let’s go!

What we completely missed was that Obama didn’t want us at his back—that the minute the campaign was over he would cut us adrift, jettison the movement that had brought him to power. Instead of using all those millions of people to force through ambitious health-care proposals or serious climate legislation or [fill in the blank yourself here], he governed as the opposite of a movement candidate.

He clearly had not the slightest interest in keeping that network activated and engaged. Though we had brought him to the party, it was as if he didn’t really want to dance with us. Instead—however painful the image may be—he wanted to dance with Larry Summers. (Fundraising idea: I’d pay $75 to be assured I never had to have dinner with Summers.)

As the months of his administration rolled into years, he only seemed to grow less interested in movements of any sort. Before long, people like Tom Donahue, president and CEO of the US Chamber of Commerce, were topping the list of the most frequent visitors to the White House. And that was before this winter when—after they’d been the biggest contributors to GOP congressional candidates—Obama went on bended knee to Chamber headquarters, apologizing that he hadn’t brought a fruitcake along as a gift. (What is it with this guy and food? At any rate, he soon gave them a far better present, hiring former Chamber insider Bill Daley as his chief of staff.)

Now, his popularity tanking, Obama and his advisors talk about “tacking left” for the election. A nice thought, but maybe just a little late.

Increasingly, it seems to me, those of us who were ready to move with him four years ago are deciding to leave normal channels and find new forms of action. Here’s an example: by year’s end the president has said he will make a decision on the Keystone XL pipeline, which would carry crude oil from the tar sands of northern Alberta to the Gulf of Mexico. The nation’s top climate scientists sent the administration a letter indicating that such a development would be disastrous for the climate. NASA’s James Hansen, the government’s top climate researcher, said heavily tapping tar-sands oil, a particularly “dirty” form of fossil fuel, would mean “game over for the climate.” Ten of the president’s fellow recent Nobel Peace Prize laureates pointed out in a letter that blocking the prospective pipeline would offer him a real leadership moment, a “tremendous opportunity to begin transition away from our dependence on oil, coal, and gas.”

But every indication from this administration suggests that it is prepared to grant the necessary permission for a project that has the enthusiastic backing of the Chamber of Commerce, and in which the Koch Brothers have a “direct and substantial interest.” And not just backing. To use the words of a recent New York Times story, they are willing to “flout the intent of federal law” to get it done. Check this out as well: the State Department, at the recommendation of Keystone XL pipeline builder TransCanada, hired a second company to carry out the environmental review. That company already considered itself a “major client” of TransCanada. This is simply corrupt, potentially the biggest scandal of the Obama years. And here’s the thing: it’s a crime still in progress. Watching the president do nothing to stop it is endlessly depressing.

For many of us, it’s been an overdue wake-up call, a sharp reminder of just who the president was really listening to. In mid-summer, several leaders of the environmental movement, myself included, put out a call for nonviolent civil disobedience at the White House over the upcoming Keystone pipeline decision. And more people—1,253 in total—showed up to be arrested than at anytime in the last 40 years. (One reason Obama’s emails stink this time around: the guy who used to write many of them, Elijah Zarlin, not only isn’t working for the campaign any more, but got hauled off in a paddy wagon.)

Bare months have past and already that arrest record is being threatened, thank heavens, by the forces of #OccupyWallStreet, a movement that includes plenty more of the kind of people who rallied so enthusiastically behind Obama back in 2008.

Obama had mojo when he knew it wasn’t about him, that it was about change. But when you promise change, you have to deliver. His last best opportunity may come with that Keystone Pipeline decision, which he can make entirely by himself, without our inane Congress being able to get in the way. So on November 6th, exactly one year before the election, we’re planning to circle the White House with people. And the signs we’ll be carrying will simply be quotes from his last campaign—all that stuff about the tyranny of big oil and the healing of the planet.

Our message will be simple: If you didn’t mean it, you shouldn’t have said it. If you did, here’s the chance to prove it. Nix the pipeline.

Bill McKibben is an organizer at tarsandsaction.org, a TomDispatch regular, and Schumann Distinguished Scholar at Middlebury College. His most recent book is Eaarth: Making a Life on a Tough New Planet. To stay on top of important articles like these, sign up to receive the latest updates from TomDispatch.com here.