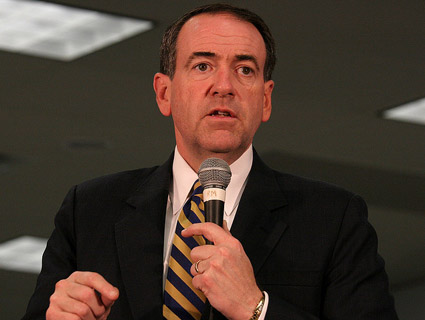 Former GOP presidential candidate Mike Huckabee has some advice for people who support the anti-union law passed in Ohio that faces a statewide repeal vote on November 8: Find out who’s voting to repeal the bill and block them from ballot box. The onetime Arkansas governor suggested deflating tires and giving these voters the wrong election date. “That’s up to you, how you creatively get the job done,” Huckabee quipped.

Huckabee’s remarks came during an appearance on Friday in Mason, Ohio, before a crowd of 350 people, according to MasonBuzz, a local blog that first reported the remarks. On November 8, Ohioans will vote on Issue 2, a much-contested ballot referendum on whether to repeal Gov. John Kasich’s controversial anti-union legislation (known as SB 5) that curbed collective bargaining rights for his state’s public-sector unions. Recent polls have shown that a majority of Ohioans support repealing Kasich’s bill. Enter Huckabee. He has been stumping for voting yes on Issue 2—that is, to uphold Kasich’s anti-union bill—urging members of the audience to do the same, and to pray in support of the measure. As part of his plea, Huckabee told the Mason crowd:

If they say no, well, you just make sure that they don’t go vote. [Crowd laughs.] Let the air out of their tires on election day. Tell them the election has been moved to a different date.”

Huckabee’s advice came at the end of a bitter stretch in the SB 5 fight. Earlier in the week, a group backing the law was caught manipulating an ad supporting SB 5’s repeal and remaking the spot to say the opposite. In the original ad, paid for by the union-allied We Are Ohio group, an elderly woman named Marlene Quinn credits firefighters with saving the life of her great-granddaughter, Zoey, during a house fire, and says that voting to repeal Kasich’s anti-union bill will help firefighters do their job. But in the recut version, the pro-SB 5 group Building a Better Ohio (whose staff includes Kasich’s former chief of staff) selectively edited the first ad’s footage to make it appear as if Quinn supports SB 5. We Are Ohio and other repeal supporters immediately condemned the disingenuous ad, and at least 30 TV stations pulled it from the airwaves. Quinn called the recut ad “dishonest and downright deceitful” and said she felt “violated.” However, Building a Better Ohio has stood behind the ad, and Gov. Kasich said “what they’re doing is fine.”

Melissa Fazekas, a spokeswoman for We Are Ohio, says Huckabee’s comments were “really shocking” and a clear example that SB 5 supporters “are willing to go to extremes” to silence Ohioans who oppose SB 5. Given that the fight over SB 5 has been a front line in the national clash over union rights, what happens on November 8 will hardly be a joke.