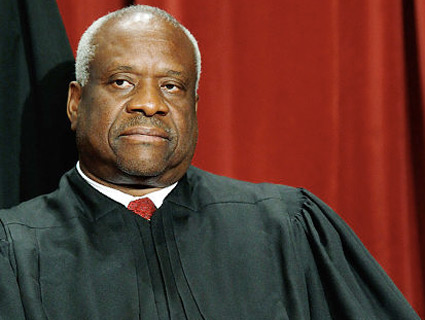 This October marks the 20th anniversary of the infamous confirmation hearings of Supreme Court Justice Clarence Thomas, in which he almost didn’t make it to the high court due to allegations that he’d sexually harassed Anita Hill at the Equal Employment Opportunity Commission. House Democrats would apparently like to commemorate this event by subjecting Thomas to a new round of hearings on the Hill. On the steps of the Supreme Court this morning, Rep. Earl Blumenauer (D-OR), Rep. Louise Slaughter (D-NY) and others held a press conference calling on the House Judiciary Committee to hold hearings investigating some of Thomas’s alleged ethical lapses. These include allegations that he failed to disclose at least $1.6 million in income earned by his wife Virginia, who worked for the conservative Heritage Foundation and has been an active opponent of the Obama health care law. Thomas has also been accused of taking unreported free trips on a corporate jet and a yacht from real estate magnate Harlan Crow.

“Reports of potential ethical lapses by Justice Thomas’s actions give rise to concerns about conflicts of interest undermining appellants’ rights of due process and also raise substantive questions about Justice Thomas’s ability to retain his seat. We urge that your committee hold hearings regarding the nature of these questions, their factual basis, and their potential to undermine the public’s trust in the Supreme Court.”

The request comes on the heels of demands by 19 House members that the US Judicial Conference, which oversees the federal courts, ask the Justice Department to investigate Thomas’s alleged violations of the Ethics in Government Act for all of the omissions on his financial disclosure forms. Thomas has said it was simply an oversight and that he misunderstood how to fill out the forms. He has since amended the forms to include the missing income.  (In a statement, Slaughter has dismissed his explanation saying, “To believe that Justice Thomas didn’t know how to fill out a basic disclosure form is absurd.”)

None of the congressional grandstanding is likely to amount to much, given how difficult it is to remove a sitting Supreme Court justice from the bench. Besides, House Republicans would have to agree to any hearing on Thomas’s conduct, and that’s never going to happen. But liberal activists and their partners in Congress aren’t necessarily looking for Thomas to step down. They want him to recuse himself from voting on the Obama health care reform law that the court is likely to hear before the next presidential election. Of course, conservatives are doing the same thing. They’re waging a concerted campaign to pressure new Justice Elena Kagan to also recuse herself from the health care case based on her service in the Obama administration as solicitor general. In the end, both justices will probably ignore all the background noise. But the fight will certainly make for interesting political theater along the way.