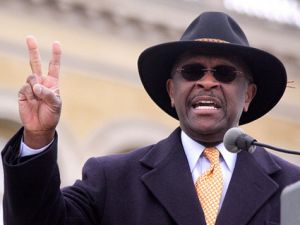 Now that Herman Cain is officially a front-runner for the Republican nomination, the vetting process has picked up in a hurry. The Atlantic‘s Conor Friedersdorf stumbled upon a treasure trove of syndicated columns the Atlanta businessman wrote between 2006 and 2009, which doesn’t do much to shatter the perception of Cain as a loose cannon (he refers to Iraq war opponents as “Hezbocrats” and calls them “the enemy”).

But I was drawn to a different piece: A 2006 column from Cain on Islam that copiously cites the work of Ohio televangelist Rod Parsley—the same pastor whose Islamophobic writings and sermons would later force Sen. John McCain (R-Ariz.) to reject his endorsement. Parsley, as MoJo‘s David Corn first reported in 2008, argued that American Christians have an obligation to destroy Islam. Cain, though, saw Parsley not as a polarizing religious figure, but rather as an expert on Middle Eastern affairs:

The roots of Islam began in modern day Saudi Arabia in the year 610 A.D. The Arabian city of Mecca was, and still is, the Arabs’ center of worship. According to Pastor Rod Parsley, author of Silent No More, Arabs from over 270 tribes regularly gathered around a building called the Ka’aba to worship their individual tribal gods. The Quraysh tribe, of which Muhammad was a member, worshipped the god Allah.

Muhammad was an illiterate desert nomad who one day began hearing voices and loud bells in his head. The voices told him he was Allah’s prophet. Muhammad thought he was losing his sanity, but with the encouragement of his wife he began to believe the voices. Muhammad eventually saw it as his mission to unify the Arabian tribes under the teachings given to him by his one true god—Allah.

Muhammad died in 632 A.D. Since Muhammad was illiterate and never wrote anything down, his followers spent the next 60 years compiling his teachings and revelations, based on their memories and notes. The resulting document is the holy book of Islam, called the Quran. But, as Pastor Parsley notes, the Quran is only authoritative in Arabic: “In any other language, the Quran is unofficial and unsuitable for doctrine.” When we consider the fact that approximately two-thirds of the world’s Muslim population today is illiterate, this means the majority of Muslims cannot read their religion’s most important book. Further, it means that Islam can be interpreted and taught any way its leaders desire.

Cain’s citation of Silent No More—which serves as the basis for the entire column—is pretty clearly an endorsement of the pastor’s work.

And that actually explains a lot. There’s a lot more to Silent No More than just early Arabian history: The central thesis of his book is that “America was founded in part with the intention of seeing this false religion [Islam] destroyed.” Borrowing a line from early New England preacher Jonathan Edwards, Parsley refers to the early Islamic empire as “Satan’s Mohammedan kingdom.” He goes back even further than that, though: Parsley argues that Christopher Columbus’ discovery of the Americas for Spain was part of an elaborate scheme to defeat Islam by forging new trade routes that didn’t rely on Muslim empires.

But perhaps the most telling passage in Parsley’s book comes when he addresses the role of Islam in the United States. Insisting that the nation is at its core Christian, he expresses alarm at the growing number of mosques in the country and fears that “history is crashing in upon us.” The implication is clear: If we don’t act now, Islam, the religion of “demon spirits,” will be upon us. He hits on most of those points in this clip, from a sermon that was sold on his church’s website:

Parsley’s warnings appear to have rubbed off on Cain’s political thinking. Earlier this year, for instance, Cain stated that a planned expansion of an Islamic community center in Murfreesboro, Tennessee, should be blocked because it threatened the First Amendment rights of area Christians. “I don’t agree with what’s happening, because this isn’t an innocent mosque,” he said at the time.

On the same grounds, he said in March that he would not appoint any Muslims to prominent positions in his administration because he was concerned their loyalty would be to Islamic Shariah law rather than the Constitution. (He has since issued backpedaled on that statement). Not that Parsley deserves full credit—peddling anti-jihad literature is a pretty lucrative business these days. But the fact that Cain turned to him for his information on Islam means that he’s building on a structurally flawed foundation.

Cain, for his part, has professed a general ignorance on international affairs, and he refused to disclose the names of his foreign policy advisers. But at least with Parsley, he’s in good company. Texas Gov. Rick Perry courted Parsley’s support with a series of events in 2005, and former Pennsylvania Sen. Rick Santorum wrote a blurb for the cover of Parsley’s newest book, Living on Our Heads. It’s not John McCain’s Republican party anymore.