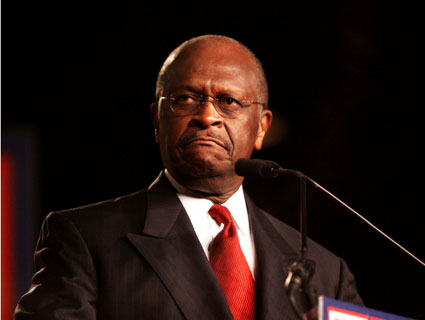 Last month, during a GOP presidential debate, former Godfather’s Pizza CEO Herman Cain scored major points when he spoke about his personal experience surviving stage IV cancer. Cain claimed that if he’d been covered under President Barack Obama’s health care plan, he’d be dead by now. He suggested that if bureaucrats had been involved, his treatment would have been delayed and probably would have led to an early death.

It was a compelling story, but an incomplete one. As Cain makes clear in his new book, This is Herman Cain! My Journey to the White House, he is probably alive today because he’s rich. And that’s not something Obamacare would have affected one way or another.

Cain devotes a whole chapter of his new book to his battle with cancer. He never once mentions insurance companies not paying for treatment, skimping on reimbursement, or disqualifying his claims. He never mentions having to fend off threats that his coverage will be revoked. He never has trouble paying the bills or getting to the hospital or into the best treatment programs. Instead, Cain’s health care story is a happy tale of selfless doctors and the brilliance of the private sector.

The sort of treatment Cain received would have put many people into bankruptcy, even if they had health insurance, thanks to caps and co-payments and other tricks insurance companies use to shift costs onto patients. Cain has never mentioned just what sort of health insurance he had during his cancer treatment, or what he has now. Multiple calls and emails over several weeks requesting information about his health care coverage went unreturned.

These omissions are glaring because as a 65-year-old stage IV cancer survivor, Cain would be all but uninsurable if he tried to get insurance now on the private market. Cain may be insured through his motivational speaking company, the New Voice (there’s no way to know for sure since he won’t answer our questions), but if he is, there’s no doubt that he’s driving up the costs for everyone else who works for him who’s also on the plan. At 65, he’s eligible for Medicare, and his participation in the government plan would drastically reduce his company’s costs. Has he signed up? The public might like to know, but Cain won’t say.

Instead, in his book, he lays out all the ways his privileged status impacted his care. For instance, when Cain was first diagnosed with cancer of the colon and liver and a 30 percent chance of survival, he was told that he should go to a specialized cancer center rather than a hospital, namely the M.D. Anderson cancer center in Houston. Not everyone who wants to go to such a top-flight facility gets to go there, however. Plenty of people with private insurance have died waiting for an insurance company functionary to approve such treatment. It can take weeks to get into Anderson, and it requires traveling at short notice, which can only add to the costs. So Cain called his friend T. Boone Pickens, the oil magnate, who used to be on the board of the center and was a big donor to the cancer center. Pickens made a call, and Cain was in.

Poor people without health insurance have a hard time getting doctors and hospitals to treat them at reduced costs, much less for free. But when Cain, a multimillionaire, needed a second opinion about his cancer surgery, he went to see a doctor in Savannah, Georgia. After giving him a full workup, Cain writes, the doctor “didn’t charge me a dime—and he supported me in my Senate campaign. He said, ‘There’s something greater that you’re supposed to do for this country and this is my contribution.'”

After Cain had his surgery in Houston to resection his colon and remove most of his liver, he spent a couple of weeks in the hospital recuperating. He was able to go home a week early because, although he was still weak, one of the companies on whose board he sits dispatched its private plane to fly him back to Atlanta so “we did not have to endure the stress of commercial travel.” (Cain notes that he doesn’t ID the company because “some jackass might want to make an issue out of it.”)

It’s disingenuous for Cain to pretend his luck comes from a lack of government meddling rather than his position of extreme privilege. Other people in his situation have recognized that their experience was very different from those of most Americans. Marjorie Williams, a well-connected Washington journalist who had liver cancer just like Cain, and eventually died from it a year before Cain was diagnosed, readily acknowledged being one of the “luckiest cancer patients in America,” by dint of having really good insurance, contacts, and access to the best doctors. In writing about her battle with the disease, she observed, “I’m quite sure that if I were among the 43 million of my fellow Americans who had no health insurance—let alone really good insurance—I’d be dead already. “

Cain, by contrast, makes it clear in his book that he believes his cancer survival was divinely inspired. He writes that he was spared the unbeatable odds of his diagnosis because God said, “Not yet!” He speculates, “Did it have something to do with the Lord wanting me to survive so that I might help set this great nation of ours on its own path of recovery?…My journey now is God’s plan.”

Unfortunately, health care policy can’t be crafted on the whims of the Lord, nor can Cain’s personal story serve as any useful lesson for reform going forward. After all, “getting rich” simply isn’t a prescription most people can follow, especially once they get sick.