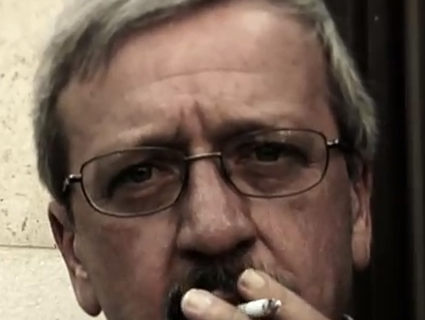 This Herman Cain campaign ad, which was released last night, has gotten a lot of people wondering what Cain’s been smoking. The Daily Beast‘s Michelle Goldberg calls Cain’s smile at the end “the creepiest fucking thing I’ve ever seen.” MoJo alum Suzy Khimm says Cain must be “clearly a devotee of Ryan Gosling in Drive, with that slooow smile at the end.” Long-shot presidential candidate Buddy Roemer, who like the rest of the field is probably wondering why he is is trailing in the polls to Herman Cain, immediately contemplated filming a spoof.*

So the ad is indeed kind of nuts. But the smoking bit raises an interesting point. Cain has been able to sell himself to Americans (and the press) as the pizza guy who makes pizza jokes, and he pitches tax plans that sound like the kind of thing that Jon Huntsman would say sounds like a pizza plan. But that’s just a part of his career. As the New York Times pointed out on Sunday, there’s another side to Cain: lobbyist. And as a lobbyist for the National Restaurant Association in DC in the 1990s, Cain was one of the tobacco industry’s best friends on K Street. His group received big bucks from major cigarette manufacturers, and returned the favor by opposing things like smoking bans. When he left, meanwhile, an R.J. Reynolds lobbyist, Rob Meyne, penned an internal memo on Cain’s future prospects. Noting that Cain was considering a presidential run in 2000, he wrote: “Nice to have goals, huh?” Meyne outlined a number of perceived electoral strengths for Cain—African American, a compelling public speaker, good record as a businessman, etc.—but added that there were a few weaknesses which he would only share off-list:

We’d really love to know what the too-hot-for-email weaknesses were.

Block, meanwhile, in addition to being Cain’s campaign manager, is the former Wisconsin state director for Americans for Prosperity, the Koch brothers-backed astroturf organization that helped bankroll the tea party movement beginning in 2009. AFP poured half a million bucks into last summer’s recall elections. And under Block’s watch in 2010, the Wisconsin state chapter engaged in a short-lived voter suppression scheme targeting college students. Which shouldn’t have been that surprising given his history: In 1997, as Alex Pappas notes, Block was banned from any political activities by the state of Wisconsin for three years and forced to pay a $15,000 fine for illegally coordinating with a purportedly independent, nonpartisan get-out-the-vote drive to drum up support for his candidate, state supreme court judge Jon Wilcox.

As is almost always the case in such ads, it’s what goes unsaid that’s most revealing.