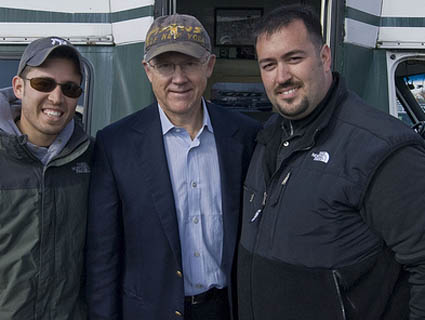 So perhaps it’s no surprise that, according to a new study by the Center for Responsive Politics, the majority of contributions by NFL teams in the past couple of years have gone to the GOP. Of the more than $1.4 million donated by team executives, players, and coaches since January 2009, some $970,000, or 67 percent, has gone to Republicans, while Democrats have received $420,000.

Here’s a look at the NFL’s top political contributors, by team:

Yet, despite the fact that the average NFL player’s salary is nearly $2 million, it’s the billionaires—i.e., the owners—and not the millionaires who are most active with political money. As you can see, the Houston Texans were the NFL’s biggest political donor, giving over $293,100 since 2009—the majority of which was donated by team owner and energy magnate Bob McNair, who has tossed $185,700 to the GOP during that time. Overall, just 2 percent of the Texans’ political contributions have gone to Democrats in the past three years or so. (The only team to donate a larger percentage to Republicans was the Dallas Cowboys: Jerry Jones‘ club has given 100 percent of contributions to GOPers, but it has donated just $17,366.)

The next four teams on the list—the San Diego Chargers, the New York Jets, the Arizona Cardinals, and the Miami Dolphins—all have given more than $100,000. Considering that the Chargers’ owner, real estate billionaire Alex Spanos, has given more than $2 million since 1990 (mostly to Republicans), it’s no surprise to see them near the top of the list. Also of note: Jets owner Woody Johnson—the heir to the Johnson & Johnson fortune who once put together a New York City fundraiser for John McCain that raised some $7 million in one night—was the second-largest individual donor, at $130,550 (88 percent of which went to GOPers).

Meanwhile, the Dolphins were the only team among the top five to give more to Democrats ($52,450) than to Republicans ($45,500); their owner, real estate mogul Stephen Ross, donated more money to Democrats ($37,200) than any other NFL-related donor. Ross was joined by the league’s wealthiest exec, Seattle Seahawks owner and Microsoft cofounder Paul Allen, who sent $36,000 to Democrats (and none to Republicans), and New England Patriots owner Robert Kraft, who donated nearly $29,000 to Dems.

That said, players and coaches barely showed up in the study. Linebacker Dhani Jones, who has played with the Giants, Eagles, and Bengals, has given more than $25,000; Cincinnati safety Gibril Wilson, $15,000. Both players have donated exclusively to Democrats. No word if either is considering a second career in politics.