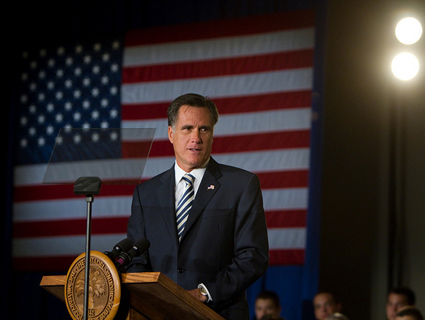 You probably heard about Mitt Romney’s on-stage condemnation of an anti-Muslim* speaker at the Values Voter Summit this weekend in Washington, DC. But there was another, less-noticed truth-to-power moment at the conference: Liberty University law school dean Matt Staver calling out his fellow conservatives for policies and language that alienate Latinos.

And then he played the trump card:

“They also have a significant link, maybe you might not know, to Israel,” Staver said. “Latinos that have the last name Perez, anything ‘z,’ have a significant historical connection with Israel itself. There is a synergy between the Latino community between Israel and between the United States and between our founding core values that we cherish so much.” (Perez can be either a purely Spanish name, i.e. son of Pedro, or a Hebrew name.)

I caught up with Staver after his speech, and after a few words of praise for Rick Perry, he lit into Romney, who has recently attacked the Texas governor’s somewhat moderate stance on immigration. “I think it’s wrong,” Staver said. “I think that what Mitt Romney is doing is pushing the Latino community away, that otherwise would be people who would be supportive of our core values. Because what they hear is anger and hate. You can’t lump every Latino into the same nook.”

There’s a faith element to Staver’s wish for more outreach to immigrant communities. But it’s also a matter of survival. Social conservatives are staring at a serious demographic shift, and unless their demographics shift with it, six decades of growth for institutions like Liberty University could well come to an end. Staver is no moderate—the main thrust of his speech was that “the future of Western Civilization” is at stake in the 2012 election, and unless we act now it could collapse entirely, and we’ll be awash in an ooze of Shariah law and gay rights. The horror! But he’s realistic enough to recognize the trend lines.

The on-stage airing of the conservative base’s divisions on Mormonism grabbed most of the headlines over the weekend (guilty). But in the long term, the issue that will define the GOP’s future will be the one outlined by Staver and left untouched by just about everyone else. Tellingly, of the 58 speakers over the weekend, only one—Texas Senate candidate Ted Cruz—was a Latino activist or politician.