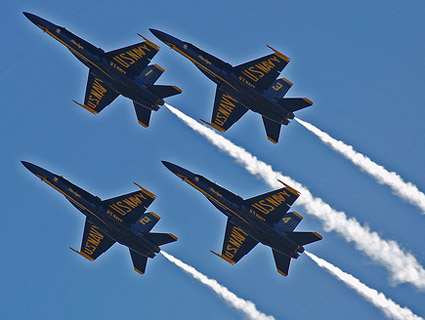 Today is the penultimate day of San Francisco’s annual Fleet Week, during which communists like myself complain about the Navy’s wasteful expenditure of taxpayer dollars on jet fuel so the Blue Angels can do acrobatics overhead. As Navy F-18s have screamed past my house, giving the city the feel of a battlefield, I’ve been thinking, “This is probably not going well for some people.” Like people who have been traumatized in war zones and whose post-traumatic stress may be triggered by the noise.

Kind of sounds like something that would happen in a movie, but that’s definitely not just Hollywood melodrama. A lot of people who grew up amid war or went to war, the masseuse said, can be triggered by innocuous noises like low-flying jets or backfiring cars even in the profoundly safe and calming setting of a massage. And unexpected—and uncontrollable—triggering is only going to become a more prevalent problem; an estimated one in five Iraq and Afghanistan vets suffers PTSD. Already, some areas hold extra support groups during firework season. With more vets coming home all the time, maybe the Navy should consider making counseling part of its Fleet Week program next year.