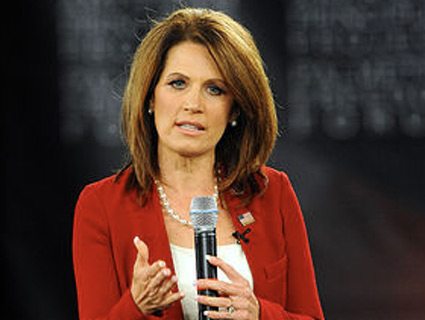 In Tuesday night’s Bloomberg/Washington Post Republican presidential primary debate, Rep. Michele Bachmann (R-Minn.) resurrected a lie peddled by Reps. John Boehner and Eric Cantor during the debate over increasing the debt ceiling: That increasing the borrowing limit would be the equivalent of handing President Obama a “blank check.”

As David Corn pointed out back in July, this is just flat wrong:

[A] blank check enables future spending. Raising the debt ceiling is about permitting the US government to cover past spending—and the blank checks of the past. These particular blank checks were issued by the Republicans during the Bush years. They voted (with the help of some Democrats) for wars in Afghanistan and Iraq without budgeting for them. They did the same with a Medicare prescription-drug benefit. They also green-lighted President Bush’s tax cuts without accounting for the drop in revenue they would cause. Together these blank checks account for two-thirds of the deficit, if not more. (See this chart.) By claiming the debt ceiling is the problem, the Republicans are blaming the bank for the bank robber’s action.’

Moreover, raising the debt ceiling does not hand Obama any more authority to spend. Congress controls spending—and the Republicans control the House and have filibuster power within the Senate. If Republicans want to clamp down on spending, they can endeavor to do so through the appropriations process. Holding the line on the debt ceiling will not turn off any spigot. The United States will continue to run up debt; the government just won’t be able to pay its bills—which will likely lead to greater interest rates and, consequently, more debt.

None of this has prevented Republicans from deploying the blank-check accusation. Their heavy reliance on this rhetorical ammo suggests it’s been poll-vetted and focus-group-tested. When the political battle at hand involves government accounting—a matter that most Americans are not that familiar with—a simple and easy-to-understand metaphor can be rather helpful. After all, how many independent voters want a president with a blank check?