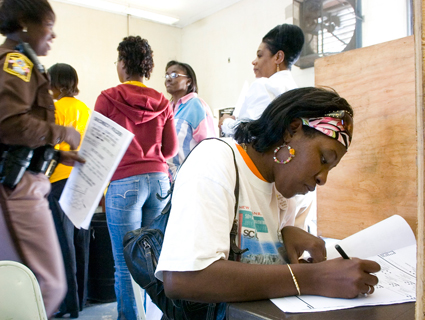 Voters at their polling site in in Selma, Alabama, in 2008. Erik Lesser/Zuma

Last Wednesday, the district court of the District of Columbia threw out a challenge to Section Five of the Voting Rights Act. The plaintiffs, a coalition of conservative legal groups from Shelby County, Alabama, argued that Section Five, which requires a number of southern states to pre-clear changes to their electoral procedures with the Department of Justice, was illegal because it seeks to correct a problem—the mass disenfranchisement of minorities—that is supposedly nowhere near as pervasive as it was back in the glory days of Jim Crow.

In its opinion, the court convincingly argued that Section Five provides a still-necessary bulwark against discrimination. But that hasn’t stopped the Project on Fair Representation—a Washington-based group that helped fund the Shelby County suit and similar efforts around the country—from pushing back.

In an interview with the Shelby County Reporter on Friday, Edward Blum, the group’s director, all but vowed that Shelby County will appeal the decision and take its case to the Supreme Court. Blum praised the plaintiffs’ states’-rights cajones, arguing that Shelby County has been forced to expend “significant taxpayer dollars, time and energy” to clear its election laws with the DOJ in accordance with Section Five. And that’s just not fair:

“The County Commission and the officials of Shelby County were very judicious and far-sighted in recognizing that not only was Shelby County being punished for sins of their grandfathers or in some cases great-grandfathers, but the entire state of Alabama was being punished, as well as most of the Deep South,” Blum said.

“Courageous? Perhaps,” he continued. “But I think they were trendsetters in recognizing that this law was really no longer necessary for Shelby County and all of Alabama.”

Things are better than they used to be, so ease up, in other words. Blum’s got a point: Literacy tests and poll taxes are illegal and, you know, lynchings are less frequent than they once were. Compelling Alabama and other preclearance states to spend tens of millions of dollars over the past few years to comply with Section Five ignores whatever progress has been made on the racial front, potentially singling out states in the South. For Blum and his ilk, Section Five doesn’t deal in the here and now.

But here’s something that does deal in the here and now: The spate of voter ID laws, Shelby County-esque pre-clearance cases, and Section Five challenges cropping up around the country, implicitly geared towards depriving minorities of the right to vote. If Blum is going to defend the Deep South on the basis that things are getting better all the time, he also needs to account for the fact that these very real, very-in-the-moment instances of targeted voter suppression aggressively undermine his case that we don’t need laws like Section Five.

Unfortunately, the sins of the father endure. Luckily, we have laws to address that sort of thing.