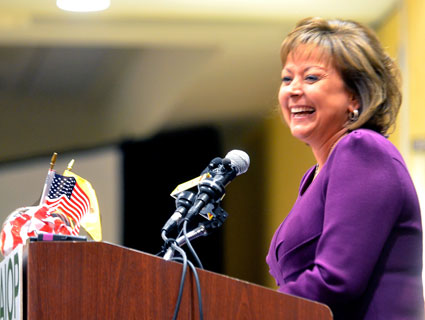 Susana Martinez, the Republican governor of New Mexico, recently admitted that her grandfather was an undocumented immigrant.Greg Sorber/ Albuquerque Journal/Zuma

New Mexico Republican Governor Susana Martinez, an immigration restrictionist who recently went after Texas Governor Rick Perry on the Laura Ingraham Show for signing a bill extending in-state tuition rates to undocumented immigrants, has admitted that her grandfather was undocumented.

Martinez’s admission came Wednesday in an interview in Spanish with KLUZ-TV, the Albuquerque Univision affiliate, the Associated Press says.

“I know they arrived without documents, especially my father’s father,” she said.

Martinez has referred to “illegal immigrants” in the past, so it’s notable that she opts for the less pejorative description “without documents” when referring to her grandfather. Here’s Martinez’ full answer to Ingraham, in response to her question about whether she supported Rick Perry’s approach to immigration:

“No, I don’t. It is not comprehensive reform to put people who are here illegally, who violated the law, and put them in front of the line for those folks who have been waiting and doing all the right things to come to the United States, to come here legally, and/or to become a citizen. We cannot allow those folks to just jump the line.”

In other words, Martinez wouldn’t support the kind of immigration reform that would have granted legal status to someone like her grandfather. A spokesperson for Martinez later told Politico she wasn’t criticizing Perry in particular.

Seventy-nine Republicans in the House have signed onto Iowa Rep. Steve King’s proposal to repeal birthright citizenship, and four Republicans in the Senate have signed onto a similar proposal from Louisiana’s David Vitter. Fortunately for Martinez, the bills do not retroactively repeal citizenship for the descendants of the undocumented, human beings Republicans often derisively refer to as “anchor babies.” It’s almost like Republicans understand that you shouldn’t punish people for decisions made by their parents. You can’t take that kind of logic too far though—then you end up supporting something like the DREAM Act. That would be really bad, because someday one of those children, or their children’s children, could end up doing something terrible, like getting elected governor of a state.

On the other hand, the possibility of Martinez ending up as a 2012 veep candidate? That might be over.