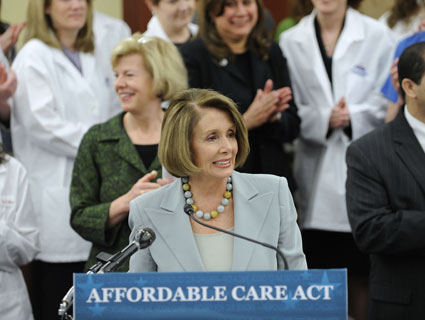 During the endless debate over raising the debt ceiling, President Obama reportedly floated the possibility of raising the Medicare eligibility age from 65 to 67 as part of a grand bargain to reduce the debt. That measure didn’t make it into the final bill.

But the proposal could have a second life. In his speech on Wednesday night, Obama said that his plan would make “modest adjustments to health care programs like Medicare”—an idea that could be taken up by the deficit supercommittee charged with finding $1.2-1.5 trillion in additional savings, Politico reports.

If the committee can’t come up with those savings, automatic cuts will be made to Medicare payments to hospitals and other health care providers, to the tune of $45 billion over nine years, according to the American Hospital Association (AHA), a lobbying group representing medical providers.

That threat seems to have spooked the AHA, which is resuscitating the idea of a gradual increase in the eligibility age for Medicare. Seniors ineligible for Medicare, they argue, will eventually be able to buy their own insurance through state insurance exchanges starting in 2014. There will also be subsidies for employers who provide health insurance for their retirees. So it’s a win for everybody, right? Not so much. Less than a third of retirees from 55 to 64 receive health coverage from their old employers.

And as Paul Van de Water of the Center on Budget and Policy Priorities has explained, raising the eligibility age is simply cost-shifting by another name. 65- and 66-year-olds who lose their Medicare coverage would pay more for their health care; two-thirds of these beneficiaries, or about 3.3 million people, would pay an average of $2,200 more in premiums, annually. But total health care spending would actually increase: 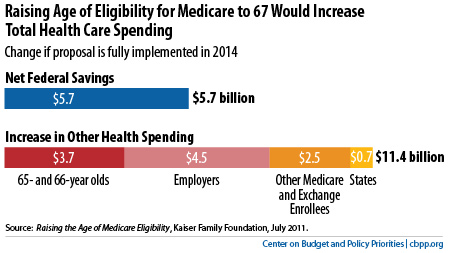 So why is the AHA backing the age increase? Over at The Incidental Economist health economist Austin Frakt explains:

That the AHA backs Medicare retrenchment in this fashion makes perfect sense for them because prices paid to hospitals by private insurers are, on average, higher than Medicare’s . . . This is a “solution” in one, narrow sense: it would reduce federal outlays by about $125 billion over 10 years, according to the CBO. However, it would not reduce overall health spending by anywhere near that amount . . .

Raising the retirement age means that more old people will get health care through private insurers; thus it follows that doctors and AHA members get paid.

Who else is getting paid? Members of the supercommittee. According to the folks at MapLight.org, the AHA has paid almost $187,000 to members of the bipartisan awesomesquad. That’s good enough to rank the group among the top 15 biggest donors. And that’s why raising the retirement age is most definitely part of the conversation.