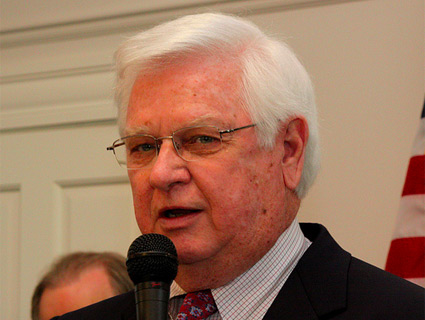 You could be forgiven for thinking it’s April all over again. On Thursday, House Republicans released draft legislation to fund the government’s day-to-day health, labor, and education programs for the rest of the year. The $153 billion measure guts heat subsidies for the poor by nearly a third, phases out funding for the Title X family planning program, cuts federal money for NPR, blocks funding to implement health care reform, and reduces eligibility for grants to low-income college students.

The bill, which cuts program spending by 2.5 percent (relative to its current level) is expected to be packaged into a larger omnibus spending bill, instead of as stand-alone legislation. Committee chairman Rep. Hal Rogers (R-Ky.) says it’s all about keeping federal agencies solvent. “To protect critical programs and services that many Americans rely on—especially in this time of fiscal crisis—the bill takes decisive action to cut duplicative, inefficient and wasteful spending to help get these agency budgets onto sustainable financial footing,” he said.

That’s one way of looking at it. Another: That the GOP is anxious to eviscerate Democratic priorities through these policy “riders,” just like it did during the prolonged negotiations over a similar budget bill in April. But TPM reports that the bill has no shot in Senate. According to one Senate aide:

[I]t has no chance of passing the Senate. The Senate will not agree to kicking hundreds of thousands of students out of the Pell Grant program, decimating programs that train unemployed workers to get a new job, or adopting any of the dozens of radical legislative riders that the Chairman has proposed.

But the stopgap bill isn’t the first instance of the GOP playing to type. Earlier this month, the House Energy and Commerce committee released legislation to peel back some of health care reform’s key patient protections. Neither that measure nor this one helps create jobs or gives a boost to states struggling to keep crucial health and education programs afloat.

Based on the evidence, we can say this much about House Republicans: They’re awfully consistent.