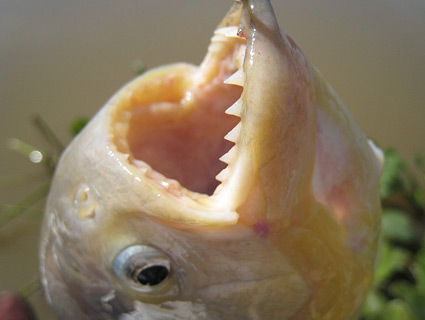 Sometimes, a headline comes along that reads like it was taken straight out of a Roger Corman flick: Over the weekend, schools of ravenous piranhas attacked scores of swimmers who were relaxing at a lake resort in northeast Brazil. AFP, the Daily Mail, the Huffington Post, and even late night talk show host Craig Ferguson giddily reported on the attacks. But the piranhas are getting a bad rap.

For all the hysterical coverage, the piranhas produced scant little carnage. There were no sexy teens perishing terribly in the water, and there was absolutely no feline-stroking Bond villain chuckling on the sidelines watching the water boil with flesh-eating fish. The worst of the reported injuries? “Bitten heels and toes after the predators attacked,” according to the Daily Mail. The area has seen a recent spike in piranha-related wounds, supposedly due to both a food shortage and overpopulation caused by the fishing of species like the peacock bass, which naturally feed on piranhas. (There’s an alternate theory that the piranhas were simply protecting their nests located in the resort’s shallow waters).

Because of everything bad horror films, urban legends, and Teddy Roosevelt have told the American public about piranhas, the species has earned the reputation of being a bloodthirsty breed of water creature that would probably jump at the opportunity to eat your family. In reality, the freshwater fish typically avoids preying on people, and statistically you have a far greater chance of getting executed by Rick Perry than being torn apart by piranhas. But that hasn’t stopped people from believing that a run-of-the-mill onslaught of starving piranhas would play out something like this:

The piranha has been the victim of a baseless prejudice for decades now. Below is some sensible debunking courtesy of Discovery Channel, in which the fish are described as timid “vultures of the Amazon” with no recorded history of claiming human lives. So if you’re planning a trip to Brazil, go ahead and pack your bikini and swim trunks.