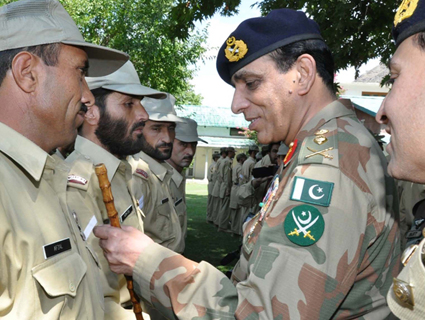 Speaking before members of Senate last Thursday, Mike Mullen, the outgoing Chairman of the Joint Chiefs of Staff, accused Pakistani intelligence of working alongside the Pakistan-based Haqqani terrorist network. The Taliban, it appears, felt slighted:

The Taliban took the unusual step Tuesday of insisting that it, not Pakistan, controls the Haqqani network, with Islamabad under growing US pressure to cut alleged ties with the group.

The militia advised Pakistan to prioritise “Islamic and national” interests and stand firm in the face of “America’s two-faced and implacable politics”.

“Neither are our bases in Pakistan nor do we need residence outside of our country,” said the English-language statement in the name of the Islamic Emirate of Afghanistan—the Taliban’s name for itself—on its Voice of Jihad website. . . .The respected Maulawi Jalaluddin Haqqani . . . is (one of the) Islamic Emirate’s honourable and dignified personalities and receives all guidance for operations from the leader of the Islamic Emirate.”

But as The New York Times‘ Carlotta Gall reports, it’s clear that Pakistan doesn’t need Haqqani or the Taliban to act on its interests. In 2007, Pakistani soldiers killed one American major and wounded three others, along with their Afghan interpreter, during a “complex, calculated assault.” The ambush apparently spun out of (what seemed like) a successful meeting to resolve a border dispute that resulted in Pakistani casualties. When Gall first reported the attack, Pakistani officials pinned the blame on “unknown assailants.” But, perhaps in the wake of Mullen’s allegations, people-in-the-know are speaking out:

The attack…was kept quiet by Washington, which for much of a decade has seemed to play down or ignore signals that Pakistan would pursue its own interests, or even sometimes behave as an enemy.  . . .

Pakistani officials first attributed the attack to militants, then, when pressed to investigate, to a single rogue soldier from the Frontier Corps, the poorly controlled tribal militia that guards the border region. To this day, none of the governments have publicly clarified what happened, hoping to limit damage to relations. Both the American and Pakistani military investigations remain classified.

“The official line covered over the details in the interests of keeping the relationship with Pakistan intact,” said a former United Nations official who served in eastern Afghanistan and was briefed on the events immediately after they occurred.

The attack involved multiple gunmen and intelligence agents who were seemingly intent on kidnapping or drawing away senior American and Afghan officials—you know, like they do:

American officials familiar with Pakistan say that the attack fit a pattern. The Pakistanis often seemed to retaliate for losses they had suffered in an accidental attack by United States forces with a deliberate assault on American troops, most probably to maintain morale among their own troops or to make a point to the Americans that they could not be pushed around, said a former American military officer who served in both Afghanistan and Pakistan.

The US accepts that Pakistan is an unreliable partner. For years now, it has put up with the fact that its interests are often best-served through risky alliances with the Mullah Omars and Jalaluddin Haqqanis of the world. It’s an explosive marriage for both partners, with diminishing returns.

But now, Mullen has made it safe for Af-Pak truth-tellers to come out of the closet. With that, you have to wonder how many more pieces like Gall’s original 2007 dispatch will have to be updated to reflect the fact that it’s not at all unusual for Pakistanis to be killing Americans.