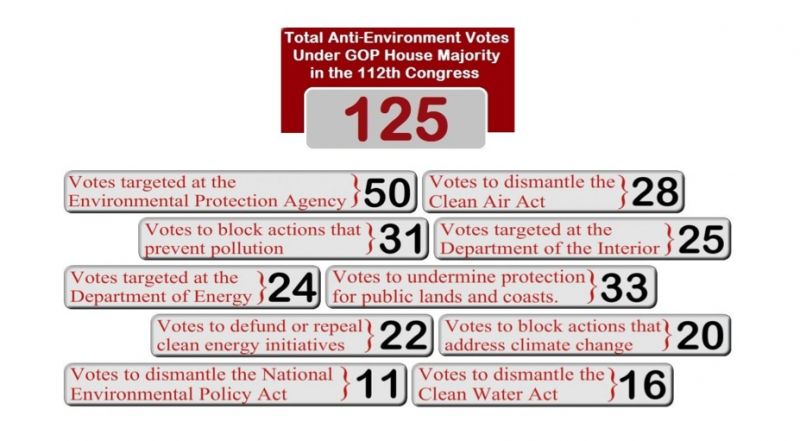 House Republicans have undertaken a war on environmental regulations since assuming the majority earlier this year, taking a total of 125 votes on measures that would take undermine environmental laws or take away the government’s authority to set regulations. Together, the measures make this “the most anti-environment Congress in history,” says Rep. Henry Waxman, the ranking member on the House Energy and Commerce Committee.

Democratic staffers on the Energy and Commerce Committee compiled the list, which includes stand-alone bills and amendments filed to other pieces of legislation. Fifty of the measures have targeted the Environmental Protection Agency, though the departments of Interior (25 measures) and Energy (24) have also been in the crosshairs. Twenty-eight have sought to undermine elements of the Clean Air Act, blocking the agency from issuing rules on particulate matter, ozone pollution, or mercury, for example.

Twenty of the measures have specifically targeted rules or programs that deal with climate change—like blocking the US from contributing to the Intergovernmental Panel on Climate Change, defunding the EPA’s program that tracks greenhouse gas emissions, and stopping the Department of Homeland Security from establishing a Climate Change Adaptation Task Force.

Of course, we’ve covered the House GOP’s ambush on environmental rules here pretty extensively. But now those attacks have been compiled in a searchable format! And the full list is really something, considering Republicans have only held the House since January. Just think what they could do in the next 15 and a half months!