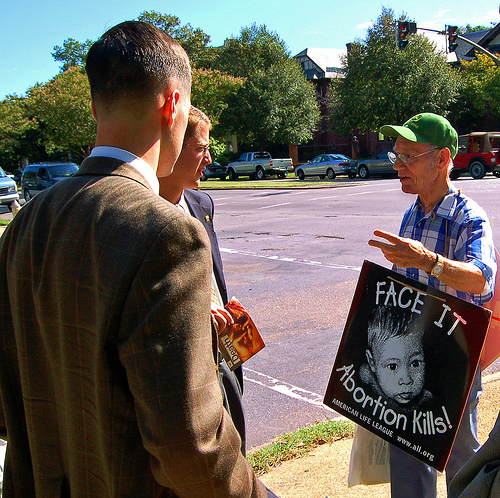 Last week, a federal appeals court upheld portions of South Dakota’s controversial “informed consent” law, which requires doctors to read a script to women before performing an abortion. The court rejected other parts of the 2005 law.

The script, which doctors are mandated to read to patients 24 hours before performing an abortion, includes a line stating that the prodedure “will terminate the life of a whole, separate, unique, living human being.” The script also contained lines informing women that they have “an existing relationship with that unborn human being” that’s protected under the Constitution and state law, and describing the “known medical risks” of abortion—including “increased risk of suicide ideation and suicide.”

Planned Parenthood and other providers sued, and in August 2009, a judge threw out those lines, determining that they were “untruthful and misleading.” But South Dakota appealed, and under the decision handed down last week, doctors will still have to deliver significant portions of the script. The appeals court agreed with Planned Parenthood that the script’s claims about mental and physical health weren’t valid. But the court upheld the portions of the bill defining the fetus as a “whole, separate, unique, living human being” and describing the mother’s “existing relationship” with that fetus.

The decision is a major win for attorney Harold Cassidy, who filed the appeal to the 8th Circuit. Sarah Blustain profiled Cassidy in Mother Jones earlier this year; the state drew from his legal writings in drafting the law. Anti-abortion groups are celebrating the decision.

Planned Parenthood welcomed the news that the medical claims portion of the script had been tossed out. It’s not clear, though, whether the group will continue its efforts to have the other parts of the law deemed unconstitutional.