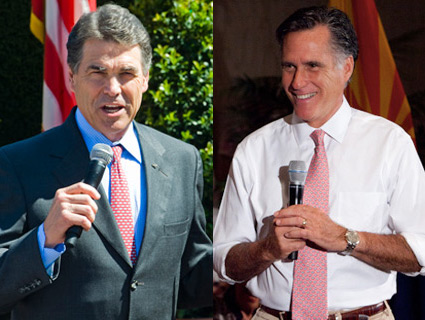 It’s tough for a Harvard-educated, one-time moderate Republican governor (who used to support gay rights, abortion rights, and gun control) to get to the right of a swaggering conservative Texan who looks as if he walked—make that, strode—straight out of a tea party video. But Mitt Romney has found a way—by targeting Gov. Rick Perry’s compassionate conservatism. That is, Perry’s support for allowing the children of undocumented immigrants to pay in-state tuition fees at Texas state colleges. In the days since the issue flared up at last week’s Republican presidential debate, the Romney camp has continued to pound Perry on this point.

At that debate, Romney—who in Massachusetts had vetoed legislation that would have permitted the kids of illegal workers in Massachusetts to pay in-state tuition rates—blasted Perry’s support for a measure allowing students who had lived in Texas for three years and graduated from a Texas high school to be eligible for those lower in-state rates. Perry responded crisply: “If you say that we should not educate children who have come into our state for no other reason than they’ve been brought there by no fault of their own, I don’t think you have a heart. We need to be educating these children, because they will become a drag on our society.” He added that 177 of 181 Texas legislators supported this policy.

Perry had doubled-down. Worse, he had insulted all those Republican voters who disagreed with him. And the Romneybots went to town. While the debate was still in progress, the Romney campaign blasted out a press release accusing Perry of backing “tuition discounts for illegal immigrants.” That was quite the negative spin. The issue could just as easily be framed as Perry—and practically every Texas lawmaker at the time—opposing penalizing Texas students whose parents were undocumented.

The day after the debate, Romney slammed Perry again while speaking at a conference of conservative activists in Florida:

You heard us last night at that debate…One of the things that I still can’t get over is the idea that a state would decide to give a $100,000 discount to illegals to go to school in their state. It is simply wrong to create that kind of magnet. It cannot be sustained. My friend, Gov. Rick Perry, said that if you don’t agree with his position on giving that in-state tuition to illegals that you don’t have a heart. I think if you’re opposed to illegal immigration it doesn’t mean you don’t have a heart. It means that you have a heart and a brain.

Playing the demagogue, Romney was making it seem as if Perry and the Texas legislators were trying to attract “illegals” to Texas schools. Romney also noted he backed a massive fence on the border—an idea Perry doesn’t fancy.

On Saturday, the campaign localized Romney’s assault. With a Michigan Republican straw poll scheduled the next day, Romney campaigned in his home state, and his press shop zapped out a press release noting how much “Perry’s Tuition Discounts for Illegal Immigrants” would cost in the Wolverine State: almost $19,000 a year per student at Michigan State University; nearly $25,000 at University of Michigan. (Expect similar calculations for every state through which Romney campaigns.) In the Michigan straw poll, Romney wound up creaming Perry, the second-place finisher, 50.1 percent to 16.8 percent.

On Monday morning, the Romney campaign disseminated another press release to reporters. Guess the subject. This one did have a twist: “Rick Perry And Barack Obama The Same On Illegal Immigration.” The Romney camp was pushing a twofer: Perry was soft on illegal immigration, and his stand was in sync with Obama’s.

This is likely to be Romney’s favorite drum to beat for weeks to come. Perry is fenced in. He signed the tuition measure, which was widely supported in Texas. He came damn close to defending it as a form of compassionate conservatism—the George W. Bush buzz-phrase that many right-wingers came to despise, associating it with big-government spending.

Perry can try to shoot it out on policy grounds, arguing the merits of the case. And he has cover from scores of conservative Republican legislators who voted for the bill. Yet when it comes to immigration, the tail-wagging-the-dog tea party, and GOP presidential primaries, a debate over the policy particulars won’t bring any cavalry to Perry’s rescue. On Friday night, Romney adviser Kevin Madden, appearing on CNBC’s The Kudlow Report, noted, with restrained glee, that Perry’s up a dry creek without a paddle. When conservative free-marketeer Larry Kudlow noted his own support for in-state tuition rates for these students, Madden replied, “You and Gov. Perry are only with about 12 percent of the American electorate on this…That’s a very difficult position to have…in the Republican Party.”

Romney and his crew are trying to turn Perry’s “discounts” for “illegals” into the Texas governor’s own Romneycare-like problem. For his part, Romney has demonstrated a certain deftness in running from—or escaping—his past. He hasn’t fully shed the flip-flop label, and he hasn’t totally neutralized the Romneycare attacks. But he’s achieved much on these fronts. After all, this mandate-imposing, former friend of the gays, abortion rights advocate, and gun-control supporter remains in strong contention for the Republican presidential nomination. Perry has yet to display a similar skill set, and Romney’s strategy of the moment is to ensure that Perry has a mighty need for such talents.

The Romney camp quotes a Sept. 15 Christian Science Monitor article that states that “Governor O’Malley went out of his way to praise Governor Perry for supporting a 2001 Texas law that allows some illegal immigrants to attend college at in-state tuition rates.”

O’Malley had also applauded Perry for “his willingness to stand up to the immigrant-bashers and thinly-veiled racism and scapegoating that is so rampant in [the Republican] party.”

This latest press release coincides with Perry’s campaign stop in Maryland on Tuesday.