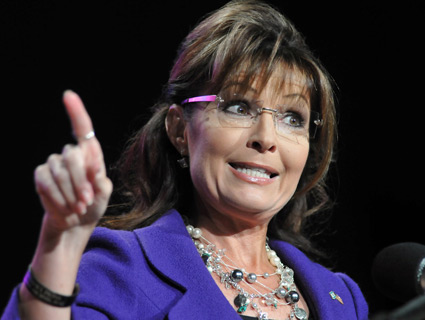 It’s hard to know how to read Joe McGinniss’ new book, The Rogue: Searching for the Real Sarah Palin. The blistering work is not a traditional biography. One-third or more is devoted to a Palin subplot: Joe McGinniss—that is, the tale of the author moving into the house next door to Chez Palin in Wasilla, Alaska, and the blog-and-tweet-storm that bold (and PR-savvy) move triggered. There is a reason for McGinniss injecting himself into the story, since the episode presumably shows Todd and Sarah at their autocratic and paranoid worst. But in Rogueland, getting to the worst is a true challenge, for there is so much—too much—to choose from.

By now, maybe you’ve heard about the most titillating portions. For instance, there’s Sarah Palin hooking up with basketball star Glen Rice when Rice was a college star playing in a tournament in Alaska. Rice confirmed to McGinniss what he called a “respectful” encounter, noting that afterward “we talked a lot on the phone” and he had a “big crush” on Palin. But for McGinniss, there’s more to this episode. In his book, this bizarre-in-retrospect intersection is proof of Palin’s “fetish for black guys.” That quote comes from an unnamed “friend.” But—wait a moment—another unnamed friend says that following the Rice date, Palin freaked out: “Hysterical, crying, totally flipped out. The thing that people remember is her freak-out, how completely crazy she got: I fucked a black man! She was just horrified. She couldn’t believe that she’d done that.”

Fetish or freak out? The reader is rightfully confused. But the point is, there’s so much juicy stuff in this book attributed to blind sources, and much of it is hard to sort out. Titanic fights between Sarah and Todd. Drug use. Sex. Affairs. Awful parenting. Supersaturated self-absorption. And weirdness. All the usual touchstones of a celeb-bio. The Palins’ home life is a 24/7 nightmare of spousal fights and parental disregard. A “former houseguest” tells of being tossed out of the Palin home because Sarah suspected that she and her husband were having sex in the guest bedroom using—OMG!—baby oil. There’s too much TMI in this book.

As a journalist who does rely on unnamed sources, I’m not knocking the general practice. But when the context of the blind attributions is a flood of vituperation, the use of unidentified sourcing becomes more troublesome. After all, McGinniss doesn’t seem to miss any opportunity to slide the dagger into his subject. Here’s a small example. When Palin was finishing her term as mayor of Wasilla, she fired a close associate. The fellow, John Cramer, who had done much to assist Palin during her time as mayor, told McGinniss his dismissal came as a complete shock. He had no explanation for it. The move speaks for itself. If Cramer’s account is accurate, it depicts Palin as ruthless and selfish. Point made. But that’s not enough for McGinniss. He can’t resist the urge to tap dance on the grave: “It was as if Sarah didn’t feel her tenure would be complete without one last gratuitous exercise of her power, without hurting just one more person who had helped her.”

Perhaps. But the reader, if he or she believes Cramer, probably already reached the conclusion that what Palin had done was vile. This little jab suggests that McGinniss is being propelled by his bias. And that does a disservice to the journalism within the book.

To be fair, The Rogue is full of named witnesses testifying against St. Sarah. Former state trooper Gary Wheeler, head of Palin’s security detail when she became governor, notes that she was a lazy chief executive. “For six years I was with [Frank] Murkowski and [Tony] Knowles,” Wheeler told McGinniss, referring to her predecessors as governor. “For them, the job wasn’t forty hours a week, it was eighty…For her, it was a part-time job.” He asserts that Palin spent much of her days shopping, coming to work at 10 a.m., and leaving by 3 p.m. He says she bought about 100 pairs of sunglasses her first year as governor. (Make of that what you will.)

McGinniss also does a fine job dissecting Palin’s associations with extreme Christian fundamentalism—territory other authors have previously excavated. Palin ran for mayor of Wasilla with one public issue: more bike paths. But McGinniss shows how her real agenda was to transform her town into an enclave of evangelism. When she campaigned for governor, McGinnis writes, “the hardest job her staff had was to keep her quiet about her religious beliefs.” He reports that after being elected governor she fired a group of minority state employees who had worked on her campaign. An aide (named) says, “Sarah just isn’t comfortable in the presence of dark-skinned people.” But what about Glen Rice?

Virtually anything negative one can say about a person who is not a murderer or genocidal war criminal is said about Palin in this book. Of course, that doesn’t make it untrue. Yet as I trekked along on McGinniss’ unrelenting death march to the bowels of Palin’s supposedly dark soul, at times I almost felt sorry for her. How many backstabbing “friends” can one person have? (One “friend” told McGinniss of a snowmobile trip that included both Todd and Sarah and allegedly involved a cocaine binge.) And how much wrath does any biographic subject deserve? At times, I wanted to reach for the hand sanitizer.

McGinniss is a journalist with a long, storied, and controversial career. Dialing back on the Palin-slamming might have yielded a better book—especially considering his run-in (or feud) with the Palin clan. The Rogue is must-cringe reading. It’s a book that puzzles as much as it enlightens. There’s a fine line between “wow!” and “really?”—and McGinniss is working both sides of that divide.