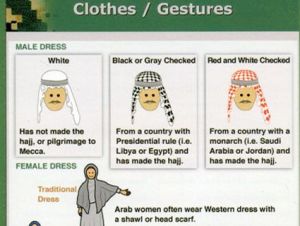 Agents at the FBI’s Quantico, Virginia, training grounds are taught that all mainstream American Muslims are terrorist sympathizers in a cult that likes to donate money to killers. That’s according to a scoop by Wired‘s Spencer Ackerman, who has exposed a series of amazingly clueless Powerpoint slides and documents from the federales’ training on Islam. If you haven’t read his story yet, do so now.

Ackerman’s report brings new light to an alarming problem that’s been well-documented since 9/11: American police officers, airport screeners, and soldiers have no freaking clue how to deal with the distinction between the vast majority of Muslims and the minisule minority that actively seek to do us harm. My MoJo colleague Adam Serwer points out that local cops around the country have been getting training that’s even worse that the FBI’s. He refers to an excellent March Washington Monthly story detailing how Islamophobic trainers are collecting homeland security dollars while spewing complete nonsense. For example: “When you have a Muslim that wears a headband, regardless of color or insignia, basically what that is telling you is ‘I am willing to be a martyr,” one trainer blathers.

But it goes way beyond that. Our Islamophobia-beat reporter, Tim Murphy, has detailed on this site how Rep. Allen West (R-Fla) is championing a skewed, conspiratorial vision of Islam to convince Americans that we’re under attack. I’ve written about the meager cultural training offered to service members and contractors headed for Iraq and Afghanistan. The materials would be humorous if they weren’t so disturbing: In them Arab men look suspiciously like Lego figures; they’re described as “illogical or irrational,” paranoid, and prone to extremes, “perhaps due to the harsh, desert environment that Arabs have lived in for thousands of years.” And that’s just Iraqi Arabs—just wait ’til you read what they say about those dirty Kurds.

All of which is to say that, 10 years after the US government got really preoccupied with Muslims of all stripes, from Iraqi Kurds, Sunnis, and Shiites to  Afghan Pashtuns, Tajiks, Uzbeks, Hazaras, and a couple hundred other ethnic and tribal identities (not to mention Muslim-Americans)—our civil servants are still taking a reductive, unfair, and ultimately dangerous attitude toward them. Which may explain why we let foreign governments lock them up and torture them, even if they’re American citizens. And perhaps it’s why the FBI relies blindly on terrorism informants who walk the fine between tracking potential terrorists and making them. If we continue to miseducate the well-intending agents and soldiers who serve at the tip of the spear, we shouldn’t be surprised when that spear misses its target.