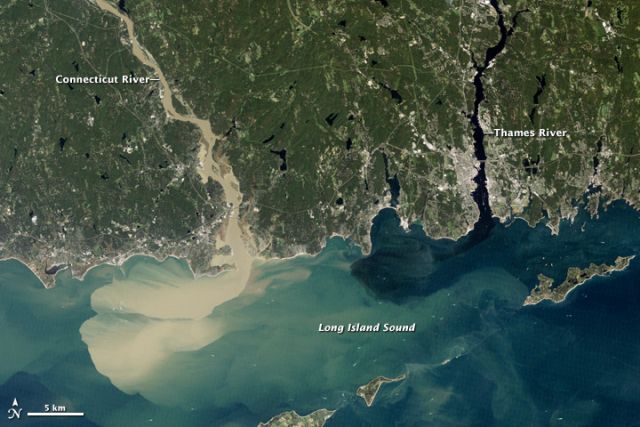 Credit: NASA Earth Observatory image captured 2 September by Robert Simmon, using Landsat 5 data from the US Geological Survey Global Visualization Viewer. A week after Hurricane Irene blew through New England, dumping 6-10 inches/15-25 centimeters of rain into the 33 tributaries of the Connecticut River—in Vermont, New Hampshire, Massachusetts, and Connecticut—sediment still poured into Long Island Sound. Meanwhile, the Thames River to the east showed little or no sediment. The difference: the Connecticut flows across lands once submerged under, and still loaded with agriculturally-rich silts of, Glacial Lake Hitchcock; the Thames flows through glacier-stripped bedrocks. Much of the sediment flooding into the sea in this image comes from farmland—with some riverbank fields literally washed away. Consequently, one of the powerful side-effects of this year’s extremely active hurricane season (14 named storms before the halfway mark, compared to 10-11 storms in the entirety of a normal season) will be the impact on local agriculture for years to come. Add to that the rebirth of La Niña, and we might expect more of the same in the coming months—including the possibility of another hyperactive Atlantic hurricane season and more lost farmlands next year.