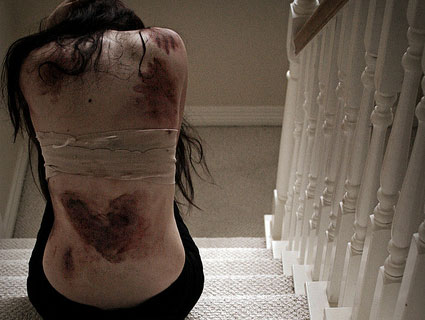 House Republicans are pushing a bill that would remove all administrative discretion from deportation decisions—even if it means potentially deporting victims of domestic violence.

Rebeca Gonzales* is one of the women who could be left in the lurch. In February, she was arrested after calling 911 on her boyfriend, who she says after years of physical abuse was threatening to keep her from seeing her one-year-old child. When the police arrived, she tried to explain to them in Spanish why she had called—only to have the police angrily tell her to speak English. Convinced she had staged the incident, they ultimately arrested her instead of her boyfriend.

“I fainted because I never imagined that they would arrest me instead of him,” Gonzales said.

Gonzales later found herself cuffed to a hospital bed. Although the doctors told the police her body showed signs of physical abuse, she was booked anyway. The charges were ultimately dropped, but it was too late: Gonzales’ information had been forwarded to US Immigration and Customs Enforcement (ICE) via the Obama administration program known as Secure Communities. After calling the authorities for help in finding a safe haven for herself and her child, Gonzales found herself about to be deported.

ICE eventually agreed to close Gonzales’ case after immigration activists turned her story into a symbol of what they see as the Obama administration’s draconian immigration policies. Back in Washington, though, Republicans were accusing the administration of not being draconian enough. In July, Rep. Lamar Smith (R-Texas), the chairman of the House Judiciary Committee, used an ICE memo urging agents to prioritize the removal of undocumented immigrants with criminal records to charge that Obama was instituting “backdoor amnesty.”

If there was an amnesty going on, no one told the White House. The Obama administration deported nearly a million unauthorized immigrants before announcing last month that it would be changing its policy by deferring deportations of undocumented immigrants deemed not to pose a criminal or national security threat. “Calling administration’s policy ‘backdoor amnesty’ is worse than calling late-in-life counseling ‘death panels,'” says Frank Sharry, the director of the pro-immigration reform group America’s Voice. “There will be no line to get into, no path to legal status, no path to citizenship in the new policy.”

Smith doesn’t see things that way. His “Hinder the Administration’s Legalization Temptation Act,” or HALT Act, proposed before the administration’s shift on deportations was even announced, would curtail the Department of Homeland Security’s ability to suspend the deportations of undocumented immigrants it decides aren’t a threat to public safety. But the bill would also narrow protections put in place by Republican Congresses that ensure victims of domestic violence won’t be deported if they call the police or seek to leave an abusive situation.

“If Smith’s bill is passed, someone like Rebeca would remain in removal proceedings,” said Jennie Pasquarella, an attorney with the ACLU of Southern California. “That would significantly undermine her ability to cooperate with law enforcement in denouncing her abuser and participating in any criminal case against him.”

The HALT Act would curtail the VAWA process by only allowing deferred action if an individual is to “be tried for a crime, or to be a witness at trial, upon the request of a Federal, State, or local law enforcement agency” or “for any other significant law enforcement or national security purpose.” Undocumented women who were being abused by a spouse who is a citizen are on the fast-track for a green card. But for those married to permanent residents, deferred action is crucial.

The U visa avenue would also be significantly narrowed. Although the U visa requires cooperation with law enforcement, the language “significant law enforcement purpose,” according to attorneys who handle such cases, suggests a higher burden than is already in place. “The wording makes it seem narrower, that it’s specific to deferred action for people who need to testify, or for a crime that is still being investigated,” says Anna Ciesielski, an attorney for Immigration Counseling Service in Portland. “If the [abuser] has been convicted, so [the victim] is not needed for the trial, what would the significant law enforcement purpose be?” Indeed, in Rebeca’s case, her ex-boyfriend has already been hemmed up on a drunk-driving manslaughter charge—so her testimony may not even be needed.

The HALT Act doesn’t eliminate U visas themselves. But there is a 10,000 cap on the number of such visas that can be granted every fiscal year, so when the government runs out of visas, people with compelling cases are granted deferred action. A House Judiciary Committee staffer referred to reaching the 10,000 U visa cap as a “hypothetical” situation. In fact, the cap was reached last year, and according to one US Citizenship And Immigration Services official, the agency is on track to reach the cap again. Last year one of Ciesielski’s clients, a teenager who was seeking to escape an abusive household, was given deferred action and was able to stay in the country despite the fact that the U visa cap had been reached. The HALT Act would make that impossible.

“They can’t grant status when they run out of visas,” says Gail Pendleton, the codirector of ASISTA Immigration Assistance. “They can only say you look like you have a good case, here’s some work authorization, and once we have more visas we’ll grant the actual visa.” Likewise, the HALT Act contains an exception for “a humanitarian purpose where the life of the alien is imminently threatened.” But since Gonzales’ ex-boyfriend is in custody, that exception might not apply to her and others in similar situations.

Gonzales, who says she wants to be a lawyer, is currently applying for a U visa. But until then, she’s got a job in retail despite not having work authorization. With a one-year-old child to care for, she has little choice.

Smith and the HALT’s 44 cosponsors know the bill can’t become law as long as Obama is president. But even if it did, the HALT Act has a built in fail-safe: Its interference with discretion on deportations expires on January 21, 2013, the day after the next president is inaugurated.

*”Rebeca Gonzales” is a pseudonym; the woman in question is currently working without authorization, and does not want to alert her employer.