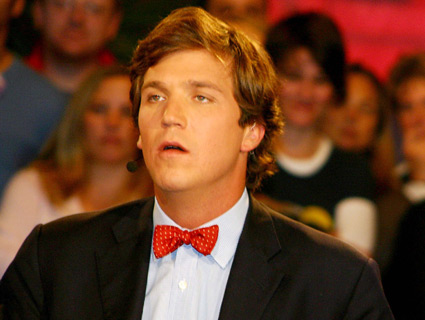 In journalism, making a factual mistake is awful. But it happens. When it does, you clarify, you correct, you admit you screwed up. Unless, that is, you’re the Daily Caller, the conservative website run by former TV pundit Tucker Carlson. It got caught in a whopper of an error, and instead of fessing up, it has insisted it did no wrong, taking a two-by-four to its critics, including Mother Jones.

Earlier this week, the Daily Caller reported that the Environmental Protection Agency was “asking taxpayers” to pay for “230,000 new bureaucrats,” at a cost of $21 billion, to implement new rules to control greenhouse gas emissions. Given that the agency currently employs 17,000, this seemed like a rather shocking revelation. Naturally, this factoid whipped Fox News and conservative blogs into a frenzy; they pointed to it as evidence that the Obama administration is ape-crazy out of control. Sen. James Inhofe (R-Okla.), a foe of climate change action, enthusiastically cited it.

But there was a problem: This was not true. As MoJo‘s Kate Sheppard pointed out, the Daily Caller had “managed to pull that number from a court filing about what the EPA is trying to avoid.” The EPA was defending a rule that would allow it to limit the number of pollution sources it must regulate, so the agency wouldn’t have to expand its workforce to such an absurd level. The EPA was not asking taxpayers to pay for 230,000 new employees; it was doing what it could to prevent this. In other words, the reality was the opposite of what the Daily Caller had reported. Media Matters slammed the Daily Caller, noting the EPA had “avoided” a scenario in which 230,000 new workers would be necessary.

The Daily Caller responded with denial and attack. In an editor’s notebook written by executive editor David Martosko, the website maintains it was correct to report that the EPA “might hire as many as 230,000 new bureaucrats,” insisting that its story had been “well reported, carefully sourced, and solidly written.” Actually, this defense mischaracterized the original piece in slippery fashion. The initial story had not said “might.” It had reported that the EPA was seeking the money for this quarter-million new bureaucrats—not that it was trying to avoid retaining more workers.

Martosko then attacked Media Matters and Mothers Jones for reacting “rashly to our reporting,” dismissing both organizations as the “fringe of left-wing thought.” It would be tempting to respond in kind—say, to wonder aloud if the Daily Caller had misreported this story in order to serve its right-wing agenda. But a far better retort is this: If Martosko and Carlson’s outfit had this OMG-story slam-dunk correct, it wouldn’t need to resort to name calling. By the way, Jonathan Adler at National Review Online concluded that the Daily Caller “flubbed” the story: “The EPA is not ‘asking for taxpayers to shoulder’ this burden, as the Daily Caller story claims.” Is Adler a left-wing fringer?

Martosko’s defense shows that the Daily Caller ought not be trusted. He maintains that an article in the conservative Washington Examiner “agreed with ours.” Did he not read the Examiner piece? The Examiner article did endeavor to back up some of the Daily Caller‘s report, but it included this damning line:

The only shaky part of the [Daily Caller] story was the claim that “the agency is still asking for taxpayers to shoulder the burden” of these regulations. In fact, the EPA filed the court document in question in an effort to avoid these costs.

In other words, the lead fact of the article was dead wrong. That’s not much of an endorsement.

The Daily Caller, caught committing a boneheaded error, is trying mighty hard to dance past this embarrassment by rejiggering its original bombshell claim and by deriding the messengers. That’s not what Tucker Carlson promised when he launched the site in January 2010. In an opening message, he declared: “This is primarily a news site. We see our core job as straightforward: Find out what’s happening and tell you about it. We plan to be accurate, both in the facts we assert and in the conclusions we imply.” The original EPA article and the subsequent defense were neither straightforward nor accurate. And if Carlson, whom I used to parry with on CNN’s Crossfire, would care to debate this point, I’m game.