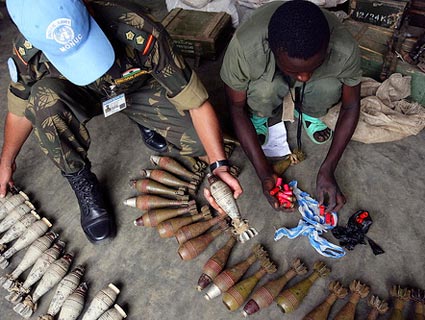 As the fact-checker for Mac McClelland’s “To Catch a Warlord,” I started thinking about the topic of her piece as the “Bosco Paradox.” The feature is about ICC-indicted Congolese warlord Bosco Ntaganda, and it investigates the competing priorities that have made his arrest (which should be easy–even Mac has his home address) a near-impossibility. Delving into DRC history, I saw that the Bosco Paradox is just one example of a long-standing pattern: In Congo, obvious solutions often aren’t implemented because they’ll simply create other problems.

This idea has cropped up recently in reference to a small, Congo-related provision of the year-old Dodd-Frank Wall Street Reform Act. The rule—Section 1502—aims to regulate four of Congo’s “conflict minerals:” gold, wolframite, cassiterite, and coltan. These are key for producing popular electronics like laptops and cell phones, and their trade has, for decades, financed DRC human rights abuses. So, Section 1502 requires US companies getting minerals from the DRC to disclose how they’re doing so, submitting reports to the Securities and Exchange Commission (SEC) on the measures they’re taking to ensure that their business isn’t benefiting DRC rebel militias.

But easier said than done. “It’s easier to sidestep Congo than to sort out the complexities of Congolese politics,” writes blogger David Aronson in the New York Times. That’s why, since Dodd-Frank’s passage, some companies have started seeking minerals outside the DRC.

This tradeoff is wreaking industry havoc. Aronson’s Op-Ed describes that poverty has been sweeping the region as mineral revenues dwindle. Global Witness reports that US mineral exports from Eastern Congo have dropped significantly.  Meanwhile, representatives from Congo mining cooperatives wrote a letter to the SEC (PDF) pleading with the US to revise its conflict minerals legislation. “Do we now have to choose between dying by a bullet or starving to death?” They write. “We are supporting you very well in what you want to achieve, and thank you for all your effort, but if we cannot start to work…we will starve.” Simply put: Ideas—even the most well-meaning ones—aren’t helpful if they impoverish us in implementation.

Yet many Congo advocates still support this rule, for a number of reasons. Firstly, says Corinna Gilfillan, director of Global Witness’s US office, the industry slump can’t be blamed on Dodd-Frank completely. Section 1502 is not in effect yet because the SEC hasn’t passed its regulations for supply chain reporting—so any effects of the provision are preemptive. Since April, there’s also been an embargo on untraceable Congo minerals, and before that, the DRC government held a six month ban on mining in part of eastern Congo. For a year now, the region’s mineral trade has been somehow obstructed, and not just by Dodd-Frank.

Others note that Section 1502 is even spurring some progress. “Militias that have been operating around certain mines are no longer doing so,” says Scott Edwards, Amnesty International USA’s Director of International Advocacy for Africa. The shift could, of course, be happening precisely because mineral industry deflation just means that fewer mines need operating. But Edwards doesn’t think so: “Demand issues would take much longer to manifest themselves,” he says. “I just can’t imagine that we’d see such a dramatic shift in the local operation of these mines if this was really a demand issue.”

But neither is unconditional support. The provision isn’t all fire and brimstone, but it’s far from perfect, and as the law proliferates—California just passed its own version—its unequivocal approval from human rights groups is disconcerting. When I asked advocates why the double-edged nature of this provision has hardly been publicized, I got no clear answer. Edwards, though, suggested that the flaws are sort of secondary—since the rule’s aftershocks aren’t necessarily ours to handle in the first place. “Kinshasa also has a responsibility to blunt any short-term hardships created as the mining regime is turned into an actual asset for the Congolese people,” Edwards said. “Ultimately, we’re just trying to actually do something about the fact that, for decades, this extractive industry has been devastating the DRC.”