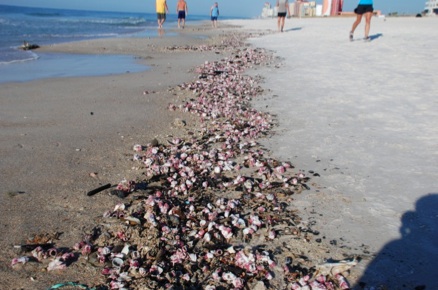 A new study out this week finds that the tar balls that washed ashore during Tropical Storm Lee are evidence that oil from the BP spill isn’t breaking down as fast as many predicted.

After the spill last year, there were a flurry of stories about how bacteria in the Gulf of Mexico had devoured much of the oil remarkably fast. And although it did appear that ravenous sea life made quick work of a lot of the oil, in the months after the spill other studies found that some of the oil and chemical dispersants were lingering in the Gulf longer than expected. This latest research from engineers at Auburn University in Alabama points to the black lumps kicked up in the tropical storm as evidence that much of the crude hasn’t broken down much since last year.

From the Associated Press:

Auburn University experts who studied tar samples at the request of coastal leaders said the latest wave of gooey orbs and chunks appeared relatively fresh, smelled strongly and were hardly changed chemically from the weathered oil that collected on Gulf beaches during the spill.

The study concluded that mats of oil — not weathered tar, which is harder and contains fewer hydrocarbons — are still submerged on the seabed and could pose a long-term risk to coastal ecosystems.

“It weathered to some extent after it moved from southern Louisiana to Alabama … but not much has happened to it since then,” said Crozier, longtime director of the state sea laboratory at Dauphin Island.

The full study is here. It’s yet another reminder that just because we (usually) can’t see the oil doesn’t mean its not still there.