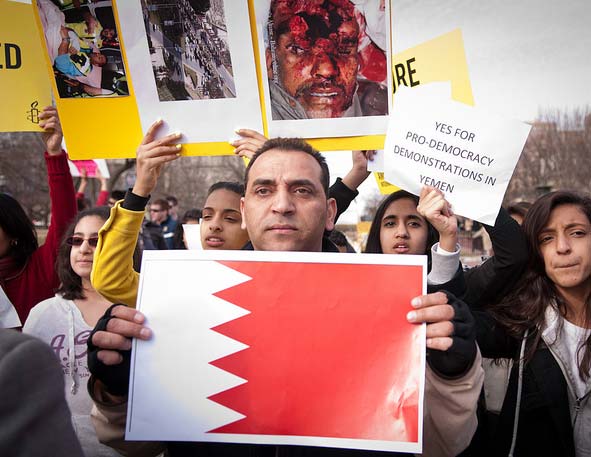 Less than three months after including Bahrain on a list of human rights offenders requiring the United Nations’ attention, the Obama administration seems to have changed its mind. The US now believes Bahrain is “an important force for political stability and economic progress in the Middle East,” according to a statement from the Defense Department, which intends to sell $53 million worth of military equipment and support to the Gulf state, including bunker buster missiles and armored vehicles.

“This is exactly the wrong move after Bahrain brutally suppressed protests and is carrying out a relentless campaign of retribution against its critics,” said Maria McFarland of Human Rights Watch, which flagged the sale yesterday. “By continuing its relationship as if nothing had happened, the US is furthering an unstable situation.”

McFarland was referring, of course, to the Bahraini government’s crackdown earlier this year against peaceful protesters, primarily Shiites, who momentarily captured the West’s attention with their demands for greater political, social, and economic rights from the ruling Sunni monarchy. In response, state security forces killed over 30 people and arrested some 1,400 more. Many were reportedly tortured.

The heavy-handed tactics succeeded in crushing the initial wave of protests, but the situation remains volatile. Police continue to violently repress anti-government activists; on Friday, they fired rubber bullets and tear gas at protesters during a demonstration ahead of tomorrow’s parliamentary by-elections.

With the exception of its statement at the UN and tepid condemnation from the White House, the US has refrained from publically criticizing its longtime ally, which hosts the Navy’s Fifth Fleet. In 2010 alone, the US approved more than $200 million in arms sales to Bahrain. Although the proposed $53 million deal is the first since last November, it will almost certainly go through, a Defense Department spokesman told Mother Jones. That’s because Congress would have to pass specific legislation to stop the sale—an unusual, if not unprecedented, action.

How exactly selling arms to this island kingdom of around a half-million citizens will “contribute to the foreign policy and national security of the United States,” as the Defense Department announcement claims, is unclear. The State Department, to which DOD referred that question, has yet to respond.* But whatever the explanation, McFarland argues, the move casts a shadow on the US’s professed support for the ideals of the Arab Spring. “It will be hard for people to take US statements about democracy and human rights in the Middle East seriously when, rather than hold its ally Bahrain to account, it appears to reward repression with new weapons,” she said.

* Update: A State Department official did eventually respond via email to point out that the sale of such weapons improves Bahrain’s capability to counter armored threats and that the State Department continues to closely monitor the human rights situation inside Bahrain.