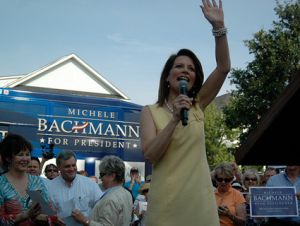 Even Michele Bachmann’s former chief strategist thinks Michele Bachmann went off the deep end on vaccines. On Monday, and then again on Tuesday, the Minnesota congresswoman and GOP presidential candidate repeated baseless claims that the HPV vaccine mandated by Texas Governor Rick Perry can cause mental retardation in adolescent girls. Her comments met swift rebuttals not just from pediatricians, but from conservative talk show hosts like Rush Limbaugh and Sean Hannity. And now you can add Ed Rollins, the long-time GOP strategist who is currently serving as a senior adviser role to the Bachmann campaign.

“Ms. Bachmann’s an emotional person who basically has great feeling for people. I think that’s what she was trying to project. Obviously it would have been better if she had stayed on the issue,” he said.

Like his candidate, Rollins has a history of going off-message. Before he took a job with Bachmann, he told CNN that she was not a “serious candidate.” In his first interview after joining the campaign, he boasted that he and his staff would fact-check everything Bachmann says to prevent her from going off the rails. Rollins stepped down from his post as chief strategist in early September for health reasons, but is still involved with the campaign in an advisory role.