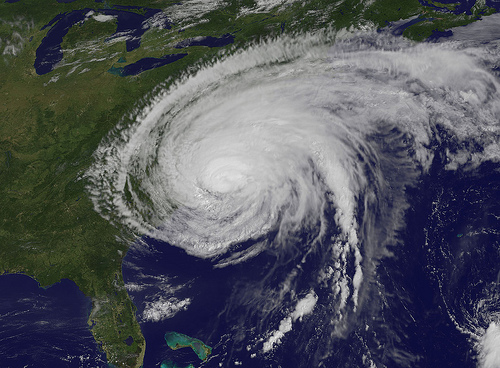 While many along the East Coast have complained that Hurricane Irene was overhyped, the storm caused billions of dollars in damage—and has still left many communities dealing with its impacts. The storm ranks as the tenth billion-dollar disaster in the US in 2011, a new record.

Irene is projected to cost the US up to $13 billion, and comes at the end of a summer filled with heat waves, tornadoes, floods, and wildfires. Previous weather events had already racked up $32 billion in costs. In short, it’s been a disastrous year when it comes to disasters.

Earlier this week, House Majority Leader Eric Cantor (R-Va.) upset quite a few people with the statement that increased spending on disaster aid should be contingent on other spending cuts. But the fact remains that this exceptionally expensive year is going to require Congress to give more money to the Federal Emergency Management Agency to keep it running. FEMA was already short on cash before Irene, and the year’s not over.

Over at the Daily Beast, Heidi Cullen, the senior research scientist with Climate Central, puts Irene and this year’s other disasters into the broader context. Weather events are getting more extreme, and much more expensive, thanks to global warming:

Our weather is getting worse, and not saying it won’t make it go away. According to Munich Reinsurance America, one of the top providers of property and casualty reinsurance in the U.S., the number of natural disasters has tripled over the past 20 years. Average thunderstorm losses have increased five-fold since 1980. For the first half of 2011 there have been $20 billion in thunderstorm losses, up from the previous three-year average of $10 billion. The reinsurance company has also gone on the record saying, “It would seem that the only plausible explanation for the rise in weather-related catastrophes is climate change.”

Just don’t expect hear anything about it from the budget hawks in Congress.