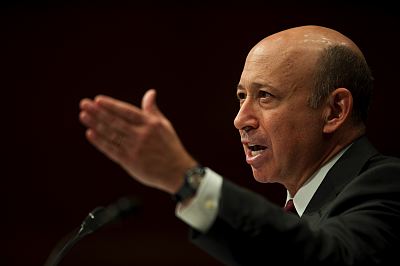 Lloyd Blankfein of Goldman Sachs commands one of the highest perches in American banking. Not only does he control Goldman’s vast trading operations as CEO, but he also chairs Goldman’s board, a who’s-who of prominent business leaders and financiers.

Now, a prominent shareholder of Goldman’s—the $850 million employee pension plan of the American Federation of State, County, and Municipal Employees (AFSCME)—is demanding that Blankfein relinquish his chairman’s seat, especially in light of allegations that Goldman prioritized internal profits over those of its clients and that Blankfein perjured himself in Congressional testimony. A report by Sen. Carl Levin (D-Mich.) released in April leveled those allegations after a two-year investigation into how Goldman assembled and sold complex securities investments. “In my judgment, Goldman clearly misled their clients and they misled the Congress,” Levin said.

The AFSCME Plan, as it’s known, filed a shareholder resolution Wednesday (PDF) in preparation for Goldman’s 2012 shareholder meeting calling on Goldman to adopt an independent board chair. AFSCME said in a press release that an independent chair could have potentially prevented the current controversy embroiling Goldman while also maximizing returns to shareholders. “A strong, independent Board chair would focus Goldman on generating long-term value for its shareholders,” AFSCME president Gerald McEntee said in a statement. “Goldman shareholders would benefit from independent leadership. A chair is supposed to oversee the CEO. It’s time for Lloyd Blankfein to stop grading his own homework.”

Corporate governance is a hot enough issue that it featured in last year’s Dodd-Frank financial reform bill. Although early language in the bill would’ve forced companies to split the CEO and chair roles, the bill President Obama signed only requires companies to explain to investors why they were or weren’t appointing an independent chair.

All this doesn’t necessarily mean independent chairs are a great idea, says Jill Fisch, a corporate governance expert at the University of Pennsylvania Law School. Fisch says the academic research on the usefulness of an independent chair is “inconclusive.” She adds that companies vary so greatly, from automakers to investment banks to Disney, that there’s no one-size-fits-all solution when it comes to who runs America’s titans of business. “I’m confident there are companies that would benefit from having an independent chair,” she says. “But I don’t think it’s some magic elixir that will help all companies, and I don’t know if Goldman would necessarily benefit from it.”