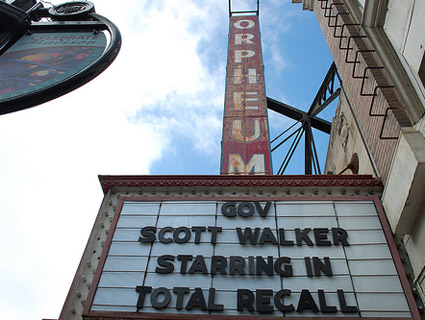 Imagine, for a moment, an alternate history in Wisconsin. What if Republican Gov. Scott Walker hadn’t tried to wipe out public-sector unions and sic the National Guard on those who opposed him mere weeks after taking office? Would this summer’s recall elections still have occurred, giving Democrats the chance to reclaim control of the state Senate less than a year after the 2010 Republican landslide?

It’s hard to envision the political turmoil now roiling the Badger State without the hundreds of thousands of protesters who poured into Madison this winter, occupying the state capitol and jamming the streets in response to Walker’s assault on workers’ rights. But from the ads flooding the airwaves, the flyers filling mailboxes, and the candidates’ stump speeches, you wouldn’t know that a fight over collective bargaining rights sparked Wisconsin’s recall elections. While not forgotten, workers’ rights have receded to the background as education, health care, voter disenfranchisement, and budget cuts dominate the debate. “Both sides don’t seem to want to fight their recall battles on the original turf,” says Charles Franklin, a political science professor at the University of Wisconsin-Madison.

That’s no surprise. Only 15 percent of Wisconsin’s workforce is unionized (on par with the national average), and five of the six districts where GOP incumbents face recall challenges lean Republican—some quite heavily. Harping on union issues alone won’t net the three seats Democrats need to gain control of the Senate and body-block Walker’s agenda. Democrats’ strategy, as laid out in interviews, campaign stops, and public statements, means selling voters on the villainy of Walker’s broader agenda and his governorship as a whole. But can they do it—and more importantly, will voters buy it?

At a Friday afternoon rally to support Democratic challenger Jessica King, the Democrats sure were trying. Standing on the step of the Waupun city hall, Senate Minority Leader Mark Miller ripped Walker for his “extreme right-wing agenda” and depicted the GOP rank-and-file as obedient foot soldiers “in lockstep” with Walker’s policies. State Sen. Chris Larson tied King’s opponent, GOP Sen. Randy Hopper, to state Senate Republicans’ controversial tactics during the winter labor protests, including using arrest warrants to drag the Senate’s 14 Democrats back to Wisconsin after they fled to block a vote on Walker’s anti-union bill.

For her part, King told the crowd that she would protect Wisconsin’s middle class by fighting the steep cuts to public services proposed by Walker and Republicans in the legislature. And in an interview afterward, she said Republicans in both chambers and the governor’s mansion had united behind a slash-and-burn philosophy without taking the people’s input into account. When asked what her first policy priority as a senator would be, she replied “Putting a stop to this extreme agenda,” without missing a beat. “Workers” and “bargaining” were barely mentioned.

King is running in Wisconsin’s 18th District, northwest of Milwaukee, in an area dotted with correctional facilities. Department of Corrections employees say they’ve been hit hard by Walker’s policies. That can only help King. John Eveland, a 45-year-old corrections officer who attended Friday’s rally, said he’d watched his bargaining rights erode and financial uncertainty skyrocket under Walker; despite a lifetime of voting Republican, Eveland said he was voting for King. “Somebody’s gotta slow these people down,” he said. “It’s like a steamroller.”

Another CO, 51-year-old Jerry Pflueger, said he feared Walker’s attack on worker rights was a step toward privatizing Wisconsin’s prisons, similar to what Republican Gov. Rick Scott is doing in Florida. He couldn’t believe it. “This has come out of left field,” he said.

Standing outside a north Milwaukee Menard’s store, Edward Orne, a 75-year-old retiree and lifelong union man, said he supported the GOP’s policies. A former construction worker, Orne lives in Senate District 8 and credited the incumbent, GOP Sen. Alberta Darling, for her role in helping to craft Walker’s budget policies. “She’s on the right track to get our state back in shape,” Orne said.

Polling data suggest the public takes a dim view of Walker and that Democratic challengers could succeed in selling themselves as the only people who can stop him. A University of Wisconsin-Madison Badger Poll released in July showed Walker’s approval ratings upside-down, with 59 percent disapproving of his record and 37 percent approving. It was only the latest in a series of polls that have shown a steady decline in Walker’s popularity since the protests erupted in Wisconsin this winter. Recalls are only happening in 9 of 33 senate districts in Wisconsin, but there’s no mistaking Wisconsinites’ disgust with what’s happening in Madison.

The Democrats’ challenge is tapping into that disgust and translating it into big turnouts in Tuesday’s recall races. If they do that, and manage to regain the Senate majority, it’s fair to say Wisconsin will have sent a signal to other states grappling with labor issues, such as Ohio and Michigan. If Democrats fail, though, that could imply that the opposite is true: that Walker’s agenda isn’t as hated as unions and Democrats would have you believe.

Either way, the remaining eight recall races (two Democratic state senators face GOP challengers on August 16) give a broad swath of Wisconsinites an opportunity unlike any other in American history to dictate what they want from their government. “This is a moment for the public,” says Franklin, the UW professor, “to look back and decide whether they support Scott Walker’s agenda or whether they want to put the brakes on that and opt for a divided government.”