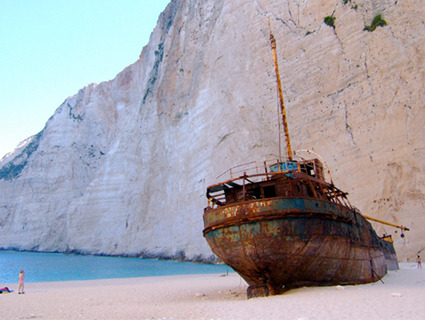 Yesterday, I explained how the grand debt compromise cuts only $7 billion in real money from the Pentagon’s budget in the next two years—roughly the cost of 3 submarines, or 20 fighter jets, or one-fifth of one KBR contract in Iraq.

Guess what costs more than three times that much per year? Rust! According to Phil Ewing over at DOD Buzz:

Commanders at all levels are more aware than they’ve ever been about the hazards and costs of corrosion, which cost DoD $22.5 billion just in 2009, according to one study. The brass is convening rust conferences, pursuing new materials and technology to help defeat it, and, in the case of the Navy, completely changing its thinking about what it means for ships.

What’s the big reason the brass isn’t doing anything about it? Ewing again:

Traditionally, if you wanted to impress a general, admiral or lawmaker, you didn’t show a presentation about rust. You talked about “transformation,” “disruptive” or “game-changing” technologies, and had big diagrams that showed ships, aircraft, ground vehicles, UAVs, satellites and troops connected by lightning bolts.

What goes for generals…also goes for congressmen. How about it, Buck McKeon? When’s the House Armed Services Committee going to stop caterwauling about its fancy shiny pork products and invest in money-saving Brillo pads?