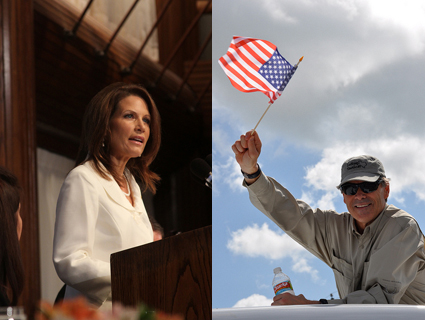 The world’s largest straw man, if I had to guess, is most likely located in central North Dakota, somewhere near the world’s largest Holstein cow and the world’s largest sandhill crane. But this Washington Post column, from former George W. Bush speechwriter Michael Gerson, certainly has to be a part of the conversation. It’s a few days old, but it presents an argument that I imagine we’ll be hearing pretty frequently over the next year or so: liberals are totally paranoid when it comes to the religious views of GOP presidential candidates. (To wit: Here are Ralph Reed and Lisa Miller making that exact point.)

Gerson, who is generally credited with applying an Evangelical varnish to Bush’s every uterrance, takes on the argument—promoted to various degrees by Ryan Lizza, Forrest Wilder, Michelle Goldberg, and myself—that Texas Gov. Rick Perry and Minnesota Rep. Michele Bachmann are part of a movement to turn the country into a Christian state. Here’s how Gerson summarizes that argument:

Perry admittedly doesn’t attend a Dominionist church or make Dominionist arguments, but he once allowed himself to be prayed for by some suspicious characters. Bachmann once attended a school that had a law review that said some disturbing things. She assisted a professor who once spoke at a convention that included some alarming people. Her belief that federal tax rates should not be higher than 10 percent, Goldberg explains, is “common in Reconstructionist circles.”

The evidence that Bachmann may countenance the death penalty for adulterers? Support for low marginal tax rates.

Bachmann is prone to Tea Party overstatement and religious-right cliches. She opened herself to criticism by recommending a book that features Southern Civil War revisionism. But there is no evidence from the careers of Bachmann or Perry that they wish to turn America into a theocratic prison camp.

That’s true enough. There’s is no evidence that Bachmann or Perry wish to turn America into a “theocratic prison camp.” There’s also no evidence that anyone on the left is actually making that argument. In reality, the only person talking about prison camps is Bachmann, who recently warned that secular bureaucrats were planning on herding us all into “politically correct re-education camps.”

For that matter, no one has actually suggested Michele Bachmann “may countenance the death penalty for adulterers,” although she has signed a pledge to crack down on adultery (as well as “intrusively intimate commingling among attracteds”) if elected president. Bachmann did assist a professor who once spoke at a convention that included “some alarming people” (which is kind of an odd euphemism for “white supremacists“), but that wasn’t the crux of Lizza’s case against Bachmann (she’s many things, but not a racist). Bachmann also attended a school that had a law review that said some disturbing things, but that wasn’t really the point of the story either. Gerson has essentially taken various non sequitur elements of Lizza’s Bachmann article and various Perry pieces and presented them as the main argument.

Here are the facts Gerson chooses not to engage: Bachmann and Perry believe that the United States is a Christian nation founded on Judeo-Christian principles, and that the tide of secularism that’s swept the nation over the past four decades (their position) has unmoored the country from its moral foundation. As politicians, they have worked to expand the role of Christianity in the public sphere, and they’ve pledged to do the same if elected president. And, yes, they’ve consciously sought to surround themselves with some pretty alarming people who, per their own statements, believe that Christians have an obligation to dominate society.

We know all this not because of some magical game of six-degrees-of-separation, but from the candidates’ own statements. Throughout her career, Bachmann has repeatedly identified the documentary How Should We Then Live, by the theologian Francis Schaeffer, as the most important film she has ever watched. Schaeffer’s thesis is that governments that aren’t built on Christian principles—and specifically, those principles of the early church—inevitably crumble, and they crumble fantastically. Christians therefore have an obligation to engage with modern society and take it back from the sea of moral relativism. Bachmann studied at a law school, Oral Roberts University, that was dedicated to, as she described it, teaching the Constitution from a Biblical perspective. She considers David Barton, the Texas pseudo-historian whose entire career is built on making the case that the United States was divinely inspired, to be an intellecutal titan and has invited him to give lectures to her friends in Congress, and to testify before the Minnesota legislature. Taking Christian Reconstructionism out of Barton and Schaeffer’s philosophy—or out of Oral Roberts Law School—would be like taking the dinosaurs out of Jurrasic Park.

Bachmann even practiced spiritual warfare, a staple of the dominionist movement, by bringing groups of “prayer warriors” into the Minnesota senate chambers after hours to pray over the desks of her opponents (including the body’s only openly gay member). And she has argued that the United States’ policy in the Middle East should be derived from the Book of Genesis.

Perry, for that matter, cites The Five Thousand Year Leap by W. Cleon Skousen as one of his favorite books; the entire point of that book is that United States’ success is wholly attributable to its foundation as a Christian nation, divinely inspired. As Skousen argued, the Constitution was based on Anglo-Saxon law, which was based on the laws laid out by the Israelites; the glue that held it together was that the Anglo-Saxons, and by extension the founders, were members of a lost tribe of Israel. Like Bachmann, Perry is an admirer of Barton (the two will spend some time together this weekend at a ranch in Fredericksburg, Texas). Perry is also a firm believer that natural law—which is to say, God’s law—is the guiding principle behind the founding documents. He has not only allowed himself to be prayed over by Dominionists; he also followed their counsel to hold a massive prayer rally at an NFL stadium that, per its organizers, was designed to convert non-Christians and serve as a launching point for a new reformation.

Calling their views specifically a “conspiracy” or a “plot” is probably a mistake. But they embody, to differing degrees, a movement to put people of faith in positions of power in order to restore Christianity to its position as the foundation of American governance. Moral relativism, after all, can’t just be defeated; it has to be replaced with something.

Of course, the other alternative, which Gerson doesn’t consider, is that Bachmann and Perry have cynically used faith as a bludgeon to achieve their own political ends. That’s what Gerson’s own bosses were accused of, after all. But I think that does a disservice to Bachmann, who’s been preaching the same message since long before anyone was paying attention.