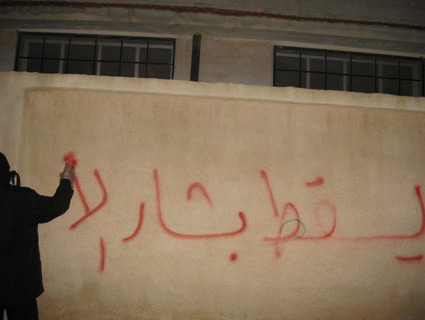 Update: On Thursday morning, The White House called on Syrian President Bashar al-Assad to step down. In a written statement, President Obama decried the Assad regime’s “flagrant disrespect for the dignity of the Syrian people.” Here’s an excerpt from the statement:

[President Assad’s] calls for dialogue and reform have rung hollow while he is imprisoning, torturing, and slaughtering his own people. We have consistently said that [he] must lead a democratic transition or get out of the way. He has not led. For the sake of the Syrian people, the time has come for President Assad to step aside…It is time for the Syrian people to determine their own destiny, and we will continue to stand firmly on their side.

The announcement comes more than a week after senior officials first told reporters that Obama was preparing a speech that would demand Assad’s speedy resignation. On Thursday, the White House also issued a new round of trade sanctions and froze the assets of the Syrian government within the jurisdiction of the US. The UN investigative unit and leading European Union powers also issued related announcements on Thursday. While some have interpreted this latest move as ripped from the “Libya playbook,” Thursday’s statement appears to rule out any US military intervention in the country:

The United States cannot and will not impose this transition upon Syria. It is up to the Syrian people to choose their own leaders, and we have heard their strong desire that there not be foreign intervention in their movement.

Secretary of State Hillary Clinton followed up with a televised speech, in which she further condemned Assad for “[torturing]…opposition leaders, laying siege to cities, [and] slaughtering thousands of unarmed civilians, including children.” Here’s the video of her speech:

These calls for resignation from the international community come a day after Assad claimed his military and police forces had halted the crackdown on what his government has called “terrorist” insurgents, and a day after he cautioned his central committee against caving to “foreign pressure.”

What remains to be seen are the reactions from involved parties and what, if any, positive effects may come from the Obama administration’s statement and sanctions. As of Thursday morning EST, Syria’s state-run media and the foreign ministry have not issued responses to the various demands for an end to Assad’s rule. Considering that certain members of the right-wing punditry have even accused the president of using the recent deaths of 30 US soldiers in Afghanistan as a wag-the-dog-style distraction from economic troubles, it’ll be interesting to see how this plays out among conservative commentators and politicians.

Original post (Fri. August 12, 2011): However gradual or overly cautious the process has been, the Obama administration appears to be laying the groundwork to call for Syrian President Bashar al-Assad to step down after over a decade of ironfisted rule. Senior officials have been hinting to reporters all week that the president is gearing up to deliver a speech that would go beyond sanctions or merely condemning the regime’s crackdown in the “strongest possible terms.”

The hint-dropping started during the same week the US Treasury Department slammed major Syrian companies—including major telecommunications company Syriatel and the Commercial Bank of Syria—with new sanctions that David S. Cohen, Treasury’s under-secretary for terrorism and financial intelligence, said “tak[e] aim” at the “financial infrastructure” of Assad’s dictatorship. On Thursday, President Obama and Turkish Prime Minister Recep Tayyip Erdogan were reported to have agreed over a phone call on the need for a “transition to democracy” for the Syrian people.

[A] senior administration official said “the policy decision has been all but made” on telling Assad to leave office. “It is his actions that have done it,” the official said…

White House spokesman Jay Carney on Wednesday reiterated that Syria “would be better off without President Assad” and said he had lost his legitimacy.

Beyond the chaos of Syria’s large-scale Arab Spring protests and the government’s sustained and brutal clampdown on the uprising, there are other salient factors the Obama administration is weighing as it comes to a decision.

Obama, ever the pragmatist, has no doubt taken into account the ideological outlook for the Syrian opposition, which (thankfully) looks rather promising (i.e. friendly to the West, peaceful, and secular). The fact that the Syrian resistance robustly rejected a recent endorsement from Ayman al-Zawahri, Al-Qaeda’s new leader, only makes them seem more like an ally worth having. And despite the insistence of certain American politicians, Assad is, with every passing slaughter of peaceful protesters, simultaneously demonstrating that he just isn’t a devil worth sticking with:

“Especially since the violence during Ramadan there has been recognition among those in the United States government that there is no possibility of working with Assad over internal reform,” Michael Doran, senior fellow and Middle East security expert at the Brookings Institution, told Mother Jones. “But I don’t think there is going to be a dramatic change in taking the lead…[in building] a coalition of states that is interested in planning for a post-Assad future. The whole experience in Libya has given the Obama administration a once-burnt-twice-shy attitude in Syria. Every informal conversation I’ve had [about this] with people in the government stresses the lack of levers of influence. I don’t agree with that, but there is that strong perception in the administration.”

Doran also argued that the Obama administration knows that the United States will have to be a major player in any change in Syria, whether it’s something they desire or not.

“At this point, it is all a question of tailoring American policy to the reality…that the regime in Syria will fall; it may be a slow motion fall, but it’s happening,” Doran said. “And with the Iranian regime trying to shape things to their advantage, the United States cannot afford to just call the game like a disinterested analyst.”

As of late Friday afternoon, there has been no new announcement made by President Obama pertaining to the situation in Syria, or one calling for Assad to step down from power.

(Meanwhile, Assad met with Indian, Brazilian, and South African diplomats and made what could be considered the understatement of the year.)