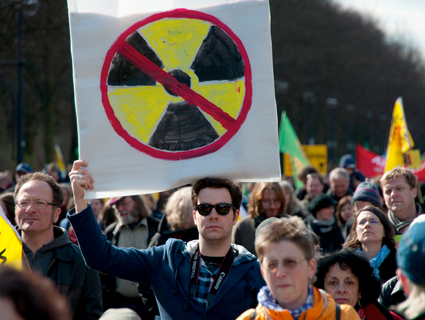 In Kansas City, Missouri, a local zoning fight is going nuclear, literally: A Monday-morning courtroom showdown between activists and politicians could determine whether the city becomes host to the world’s first privately owned nuclear weapons plant.

The proposed plant, a 1.5 million-square-foot, $673 million behemoth, would replace an aging facility, also in KC, where 85 percent (PDF) of the components for nation’s nuclear arms are produced. The new plant would be run by the same government contractor as the old one—Honeywell—and proponents say the only major change will be more jobs and city infrastructure. But there will be another big difference: The federal government will sublease the property from a private developer, who in turn will lease it from the city for 20 years…after which the developer will own it outright.

The developer that could ultimately own its very own nuclear weapons plant, Centerpoint Zimmer (CPZ), didn’t even exist until the deal for the Kansas City facility. It’s the product of a union between Zimmer Real Estate, a big swinger in local properties—”Their red signs are all over town,” says Ann Suellentrop, a local anti-nuclear activist—and Chicago-based builder Centerpoint, which just happens to own a new 1,000-acre industrial park across the street from the planned production facility. In what it called a “competitive bidding process,” the US General Services Administration awarded CPZ a contract to build the new plant—on a soybean field that the company already owned. The Kansas City Council, enticed by direct payments and a promise of “quality jobs,” approved the deal and agreed to exempt CPZ from property taxes on the plant and surrounding land for 25 years. It also agreed to $815 million in bond subsidies to build the plant and needed infrastructure.

“It’s one thing to be concerned about nuclear proliferation,” Ed Ford, a Vietnam-era conscientious objector and the only city councilman to oppose the plan, told the Kansas City Business Journal. “It’s another thing to have your city be an active partner.”

But the local politicking has also given opponents of the plant an old-school option: a city ballot initiative. Suellentrop, cofounder of Kansas City Peace Planters, and her anti-nuclear allies collected nearly 5,000 signatures to get a proposal on the November 8 ballot that would bar nuclear weapons production within city limits. But rather than let the proposal get an up-or-down vote, the City Council quashed it last week by a 12-1 vote. Their reasoning: The measure would have violated the federal government’s power to provide for national defense. “We feel this initiative is unconstitutional on its face,” councilman John Sharp argued.

At first glance, it’s not entirely clear why a new facility is needed; the Obama administration has announced a desire to dismantle more weapons in the nuclear arsenal, and with the passage last year of the New START treaty, no new fission bombs are slated for production. However, in return for bringing New START to a vote in the Senate, conservative Arizona Republican and nuclear hawk John Kyl secured a promise from the White House that it would boost funding for “modernizing” the nation’s existing warheads: $80 billion over 10 years.

Kansas City’s weapons plant builds the bombs’ nonradioactive parts. “They make the bullet and we make the gun, basically,” says one local activist.

But critics say (PDF) that money is going to new facilities that would build the ingredients for new warheads. Among these are plants to create plutonium warhead cores at Los Alamos, New Mexico, and highly enriched uranium secondary cores at Oak Ridge, Tennessee, both at a cost of billions a year.

That’s where Kansas City comes in. The city has been a linchpin in the nation’s nuclear weapons production cycle since the 1940s. The existing facility builds virtually all of the weapons’ nonradioactive parts and ships them off to Texas for assembly. “It makes everything that glues the weapon together, makes it deliverable, makes it accurate,” Suellentrop says. Along with the core production facilities at Los Alamos and Oak Ridge, the new Kansas City plant could give the United States the ability to quickly make more warheads. “They make the bullet and we make the gun, basically,” Suellentrop says.

Last week, after the City Council blocked their proposal, the anti-plant activists sued to get it on the November ballot. A judge agreed in principle last Friday, declaring that the city politicians would get one last chance to argue their case on Monday morning. If Suellentrop and her cohorts in the anti-nuclear coalition lose out then, they plan to appeal. But if they win, voters could throw a major wrench in the works of the nuclear weapons complex.

“They just closed half of the schools last year,” Suellentrop notes. “The school system is in chaos; the hospitals have mostly moved to the outlying areas. It’s not a very good economic stimulant, making nuclear bombs.”