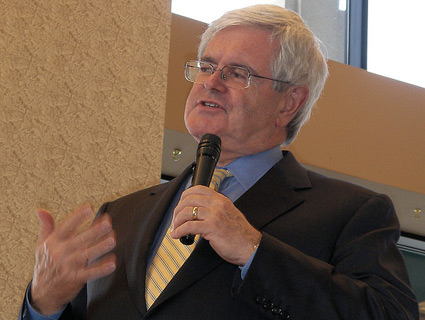 Although his presidential campaign has all but imploded, former Speaker of the House Newt Gingrich has at least one more big plan to boost his chances in the Republican primaries: an appeal to Asian-American voters. His staff already has him committed to a new batch of outreach efforts in Asian American and Pacific Islander communities in Hawaii, California, and—at the end of August—Virginia. Politico reports:

“We are still new with the Asian-American community, so we’re just starting to break in,” said Michelle Selesky, Gingrich’s deputy press secretary, who is heading up his Asian-American outreach…

Gingrich has been talking for months about the untapped potential of the Chinese community in Iowa, thanks to a local Chinese activist who told him in January that as many as 10,000 Chinese Americans live in the state — a number the Census Bureau pegs at 1.7 percent of the [state’s] population. Gingrich also sees what could be the state’s next immigrant boom in the University of Iowa’s large number of international students from China, though it’s not clear how many of them are citizens and able to vote.

Jonathan Chait poked fun at this strategy back in early June, when he wrote about the improbability of Gingrich emerging victorious in Iowa after “mobilizing a wave of Chinese-Americans” to attend a “caucus that notoriously caters to a small cadre of motivated partisans.”

Newt Gingrich’s master plan has just one major shortcoming: He has no real appeal to Asian-American voters. It’s not him, really; it’s his party affiliation (though the whole “we would never accept the Japanese putting up a site next to Pearl Harbor” thing from last summer certainly didn’t do him any favors). These days, Asian-Americans vote overwhelmingly Democratic: In 2008, they helped put Barack Obama over the top, and thanks to the moderately liberal (as well as pro-immigration) consensus growing among the demographic’s young generation, the right lost out on those votes over half a decade ago.

In trying to seize upon the conservative sliver of an already tiny ethnic population, Newt’s strategic gamble just comes off as an exercise in the kind of futility that the Gingrich campaign has come to typify. Then again, if you’re going to fall flat, you might as well do it in Hawaii.