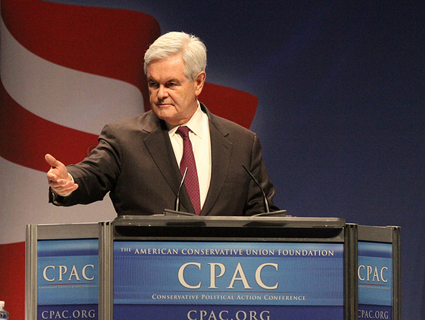 Former Speaker of the House Newt Gingrich is running for president.<a href="http://www.flickr.com/photos/n3tel/5435479716/sizes/z/in/photostream/">markn3tel</a>/Flickr

Newt Gingrich has officially lost the future. The former Speaker of the House raised $52 million over the last four years through his political action committee, American Solutions for Winning the Future—but now that Gingrich has jumped ship to run his own (floundering) presidential campaign, the 527 he founded and chaired has officially shut down. Per Peter Stone:

To make his bid for the GOP nomination, Gingrich had to sever his ties with the 527, as federal election law requires for candidates, and that proved to be a big blow to its growth and ongoing operations, [chairman Joe] Gaylord said…

The group was well known in conservative policy circles for promoting a “Drill Here, Drill Now,” drive to increase the use of domestic energy resources and was invariably a sharp critic of government regulations. This year, the group created a website called noMoreObamaCare.com to spur GOP lawmakers to repeal the sweeping health care reforms that the administration signed into law in 2010.

One election-law expert wasn’t surprised by the group’s quick demise. “Some political organizations are like one man shows on Broadway,” quipped lawyer Larry Noble of Skadden Arps Slate Meagher & Flom in an interview with iWatch News . “Once the stars leave, the shows often fold.”

As Alex Burns notes, Gaylord had initially planned to keep the PAC afloat while Gingrich ran for president; instead, it’s become yet another casualty of his disastrous campaign.