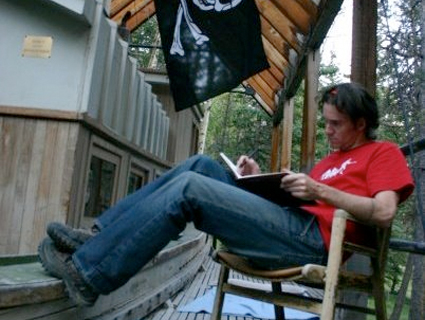 I first met Chris Cannon 13 years ago—Jesus, 13 years!—when we were undergraduate transfer students at Columbia. We were members of a small motley fraternity at that institution, military vets looking for some purpose in the liberal academy. Both of us found it. Both of us took a circuitous route getting there.

For Chris, a former White House Marine (and roadie for Willie Nelson), that road took him to graduate study in anthropology, which better prepared him to dissect pop culture—and his own experiences as a killer angel for the US government—in writing.

The result of his anthropological study—a three-part memoir, “Little Sins”—is online at The Tyee, a kickass Vancouver-based magazine run by former MoJo editor David Beers. In the stories, Chris explores his military service, his later dedication to saving a life with a bone-marrow donation, and his thick, salty Gen X-ness. I highly recommend the series, but if you have time for just one excerpt, make it this one:

There is no training for the aftermath, the spiritual reckoning that comes with killing someone who looks, in flashbacks, suspiciously like you.

I’ve written it down a dozen times, recycling the memory with each attempt. Sometimes it’s the palm trees that stick out, fat and round and rough at the base. Sometimes it’s the smell of my own sweat, so thick it soaked through a quarter-inch of Kevlar. But the event, the moment I took a life, was painfully routine. We surprised them, two men at an intersection of footpaths. They raised their weapons and fired into our ranks. I dropped to the ground and rolled through the sand, just as I was trained, so I would pop back up in a different location. The words of my instructors even echoed through my head: “I’m up, he sees me, I’m down.” My canteens and spare ammunition dug into my bony hips, just like they had always done in training. My helmet dropped forward, covering my eyes, just like always. I drew back the bolt, thumbed the selector switch to fire, squinted behind the rear sight, and, like always, jerked the trigger when I should have squeezed it. Three hasty shots, and a quick glance at the target in time to see him fall.

When I play the memory, I tend to invent details, grasping for adjectives to make it seem like more than it was — perhaps there was an entire squad nearby, perhaps we prevented an attack on civilians. Perhaps they were not simply two men, poorly trained and poorly armed, smoking cigarettes and talking of home. If he had tried to run, or simply dropped to the ground, I might have lost my nerve — motion is life. But he just stood there, firing his weapon, otherwise still as paper.