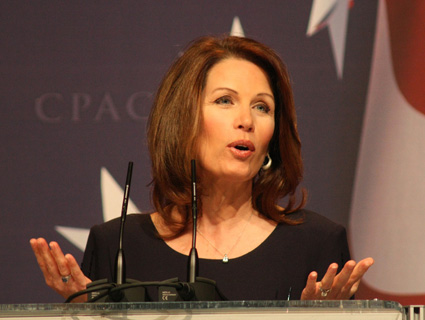 I have a magazine story that’s up on the site today tracing Michele Bachmann’s political evolution from a born-again high school student to a Minnesota state senator. The headline more or less captures the thrust of the piece: “Crazy? Like a Fox.” You can call her a flake or a loon or a black helicopter Republican (as her Senate colleagues did behind her back), but Bachmann has a coherent worldview that her opponents would do well to understand—it’s what’s made her political rise possible.

One of the key elements of her ideology, as I’ve noted previously, was the work of theologian Francis Schaeffer, whose film How Should We Then Live Michele and her husband Marcus watched together as Winona State University undergrads. Schaeffer’s central premise—one that Bachmann has explicitly endorsed and adopted for her own ends—is that American society has been beset by moral relativism. Rome fell because it was built on a lousy foundation—a flimsy belief system whose gods themselves were prone to vice, not virtue. A consequence of that was a willing submission to humanity’s basest impulses. Speaking amid the ruins of Pompeii, Schaeffer notes that the city was in the midst of a “cult of the phallus” just before the eruption of Mount Vesuvius.

Fear of moral relativism helps to explain why Bachmann embarked on her crusade to combat gay marriage and keep homosexuality out of Minnesota public schools with such fervor. Being gay wasn’t just an individual sin—it was symptomatic of a society in disarray. But  don’t ask her about any of that now. Despite persistent questioning on the subject, she’s still refusing to talk about her anti-gay views. Here’s Michael Shear:

On ABC’s “This Week,” Mrs. Bachmann was asked about a statement she made in 2006 that being gay was the equivalent of “personal bondage, personal despair, and personal enslavement.”

Mrs. Bachmann declined to say whether she still believed those words, saying only that “I am not running to be any person’s judge. And I give — I ascribe dignity and honor to all people, no matter who they are. And that’s how I view people.”

On “Meet the Press,” she gave a similar answer to the same question.

Bachmann’s best articulation of her go-to response to questions about gay issues was on “Meet the Press,” when she said, “these kind of questions aren’t what people are concerned about right now.” That’s true—unless you’re among the millions of LGBT Americans directly affected by these issues. Or, for that matter, unless you’re Michele Bachmann, who has now signed two pledges in the last month committing her to oppose gay marriage, and who makes her leadership on the issue part of her stump speech. In essence, Bachmann is arguing that gay marriage is a really trivial issue that’s also an existential threat to the core foundation of American society, the family. Got that?

Anyway, read the piece if you’ve got a minute.