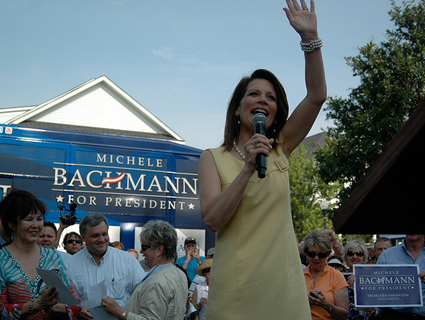 Lost amid the last-second push to pass the “sugar-coated satan sandwich” that is the debt ceiling deal, Eli Lake has an interesting piece over at The New Republic exploring the Republican party’s collapsing foreign policy consensus. The good news? The cocky, rigid neoconservatism that defined the last decade is less influential now. But that doesn’t mean it’s being replaced by anything more, well, sane. Here’s Lake:

When I started asking around about Bachmann’s foreign policy ideas, I heard the same thing from multiple people: that I should talk to Frank Gaffney. Gaffney himself stressed that he had no formal relationship with Bachmann as an adviser. But he did say that he had contact with several of the GOP candidates. And, of Bachmann, he said this: “She is a friend and a person I admire. I hope she is getting the best counsel she can.” He added, “We are a resource she has tapped, I’m assuming among many others.” When I asked him whether Bachmann had been briefed on the Team B II Report, he replied, “We’ve spent hours, over several days with her. I think she’s got the bulk of what we would tell her in one of the more formal presentations.”

Bachmann’s connection to the Team B II Report—and her conviction that sharia law is a threat to the United States—helps explain some of the key places that she splits from the neoconservatives. To most neocons, the Arab Spring was good news, because it meant the potential spread of democracy in the Muslim world. But the Team B II crowd was pessimistic. “Ever since 2003, when the thrust of the War On Terror stopped being the defeat of America’s enemies and decisively shifted to nation-building, we have insisted—against history, law, language, and logic—that Islamic culture is perfectly compatible with and hospitable to Western-style democracy,” McCarthy has written. “It is not, it never has been, and it never will be.”

Gaffney, for the unfamiliar, is a former Ronald Reagan Pentagon official who has become one of the leaders of the right-wing anti-Islam crusade. Team B II was an ad hoc group formed by his Center for Security Policy which last year produced report, Shariah: The Threat to America, on the existential threat posed by radical jihadis in the United States government.

Gaffney has warned that CIA Director David Petraeus is a slave to Islamic Shariah law; that President Obama’s missile defense logo represents a concession to radical Islam (it was actually produced by the Bush administration); and that “there is mounting evidence that the president not only identifies with Muslims, but actually may still be one himself.” In 2008, he also argued that “there is evidence Mr. Obama was born in Kenya.” Gaffney believes that high-ranking members of the Obama foreign policy team are secretly working for the Muslim Brotherhood, and, last fall, he alleged that Americans for Tax Reform founder Grover Norquist was in cahoots with radical Islamists as well—which, in turn, meant that the entire Conservative Political Action Conference (CPAC) had been compromised.

This all makes Gaffney sound conspiratorial, but that’s kind of the point: His big foreign policy idea, which he’s presumably counseling Bachmann on, is that is that there is a comprehensive plot by Islamic extremists to infiltrate the United States government and all other levels of society and destroy America as we know it. But then again, considering Bachmann once attended a conference dedicated to framing Middle Eastern politics in the context of End Times prophecy, Gaffney might be a step up.