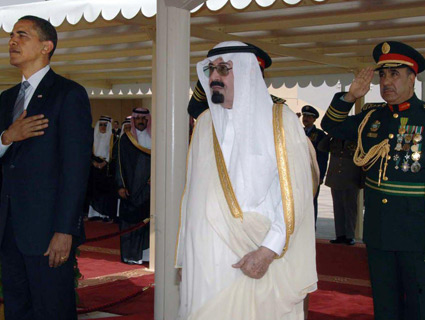 On Monday, after calling his ambassador to Syria back to Riyadh for “consultations,” King Abdullah of Saudi Arabia issued a televised statement denouncing the Syrian regime’s crackdown on dissidents and protesters. The Saudi monarch placed an emphasis on lasting political reform:

Every sane Muslim and Arab or others are aware that [the crackdown] is not of religion, values, or ethics…What is happening in Syria is unacceptable to the Kingdom… Saudi Arabia…[demands] the stoppage of the killing machine and bloodshed…[and the] introduction and activation of reforms that are not entwined with promises, but actually achieved so that our brothers…in Syria can feel them in their lives as dignity, glory and pride.

So, somewhere between the chaos in the streets, the torture of political prisoners, the media blackouts, and all that conspicuous mass-murdering was the last straw for Saudi Arabia’s ruler. It’s just that this particular straw has absolutely nothing to do with the repression, bloodshed, or torture, but rather regional and sectarian power plays. Brian Whitaker of The Guardian breaks it down lucidly:

Saudi Arabia has nothing to teach Syria about democracy, and protest demonstrations in the kingdom are totally banned… Saudi Arabia has no interest in promoting democracy or human rights in Syria; it does have an interest in promoting Sunni Muslim influence and combating Shia influence (as embodied at the international level by Iran). Considering the Assad regime’s ties with Iran, this suggests a motive for Saudi Arabia to become involved now—in the hope of driving a wedge between Iran and a post-Assad Syria.

Needless to say, the irony of Abdullah’s statement is excruciating enough to constitute unintentional satire. The Kingdom has gladly flexed its military muscle to quell Arab Spring protests in Bahrain, and no one would ever mistake Saudi Arabia, of all places, as a hotbed of political reform.

In other words, Saudi Arabia condemning Syria for human rights abuses is like Silvio Berlusconi telling David Duchovny that he needs to cool it with the womanizing and focus on his marriage.