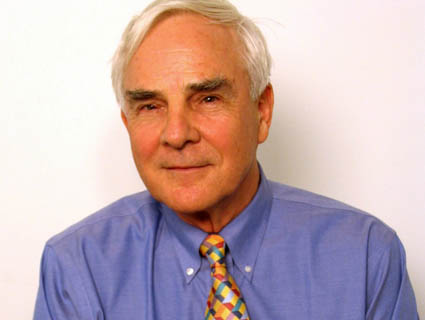 In October 1988, a small group of education leaders came together to define the rules for what they hoped would become the “incubators” of influential ideas for improving public education. They called these new schools charters.

Veteran education reporter John Merrow was in the room, chronicling the optimism of the moment, and he would keep following the charter-school story for the next two decades. The evolution of the charter-school movement, from its lofty original intentions to stubborn realities on the ground, is just one of hundreds of tales Merrow and his team pursued in the past four decades. Merrow, who has worked with PBS NewsHour since 1985, has a doctorate in education policy from Harvard and has written two books on education. His latest, The Influence of Teachers: Reflections on Teaching and Leadership, is a fascinating walk down the memory lane of education reform. It has deeply personal reflections on everything from “testing frenzy” and grading to paying teachers and preventing bullying. Unlike most books on K-12 education issues, which seems to be written for policy wonks rather than parents and students, Merrow’s gets to the heart of the matter with style and grace.

I caught up with Merrow to talk about The Influence of Teachers and his thoughts on improving schools.

Mother Jones: Since your book at its core is about excellent teachers, how would you define a great teacher?

John Merrow: A great teacher intuitively thinks “How is this child intelligent?” rather than “How intelligent is this child?” If I could give you just one catch phrase, that would be it.

MJ: Do you think the latest education reform efforts support that kind of teaching?

JM: No, we are moving backwards. No Child Left Behind has done a great deal of damage. According to Marshall Smith, who was the undersecretary of education [in the Clinton Administration] and a respected scholar, the testing has doubled in the years of NCLB. At the same time, there has been stagnation on the major national test, the National Assessment of Educational Progress. Testing is largely punitive. It’s a “gotcha” game. We are disempowering teachers.

I think the wisdom of Ronald Reagan applies here when he said, “Trust but verify.” What we need is a system where we trust teachers, but we also have a way to verify what’s going on.

MJ: In the chapter where you discuss the battle between these two camps—”better people” versus “better jobs”—my takeaway was that there were limitations to both analyses. It seemed that you wanted to merge these two approaches more.

JM: I am not arguing that truth is in the middle, because I think that the “better jobs” argument is far stronger. It is true that the teaching force is generally drawn from those who score in the bottom half academically. It is also true that the great deal of teacher training is not very good. The rewards for teaching are backloaded. You almost have to teach for 20 years before you can see significant rewards coming. Other countries don’t do it that way. Other countries recruit from higher up in the academic pile. They spend a lot more time on the quality training, especially in the first year. And the pay is better at the front end. All of these things create a different kind of a teaching force, but also a system that trusts its teachers.

This is not in the book, but I think the wisdom of Ronald Reagan applies here when he said, “Trust but verify.” He was talking about the Soviet Union, of course, but what we need is a system where we trust teachers, but we also have a way to verify what’s going on. Right now we are moving away from trust toward mechanistic efforts to verify. Thirty sates now have legislation that either allows or requires that student test scores be used to evaluate pay and perhaps fire teachers. We clearly need ways to verify what’s going on, but you can’t have a system that is founded on a lack of trust. Years ago, we didn’t have any way of verifying. We just trusted. On the one level, ironically, it worked, because women didn’t have many options for careers. So, we had a ton of really smart, talented women in our classrooms. I’m in no way, of course, suggesting that we go back to that, but the side benefit of that was that we had teachers we trusted. What the teacher wrote on the report card was gospel. Nowadays, they don’t even have a space for a teacher to write. Why should the teacher write, if no one will pay attention to it? We went from trust into a frenzy of verify.

MJ: Do you see any good examples of a healthy balance on the ground between trust and verification?

JM: Yes. I think there are schools where the premise is trust. The High Tech High in San Diego, founded by Larry Rosenstock, a brilliant educator, has that. Seattle had a system under [former superintendent] John Stanford where parents had choice. Schools had to compete for kids, dollars followed the kids, but the principal, usually working with faculty, got to chose the teachers. The unions waved the seniority and the teachers competed for jobs. Just because you taught for two years, it doesn’t automatically mean that you get the job. I have to pass whatever hurdles the school itself has. They have to want me as well. The school then becomes an intentional community. The people who are there, want to be there. Once you want to be there, it’s a lot easier to set the goals, and work toward those goals, and be a part of a team.

MJ: Why do you think the debate among the two camps in education reform is so polarized?

JM: It’s a function of a polarized society and this polarization didn’t start [with], nor is it limited to, education. We are just a very badly polarized society. Witness this debt ceiling stuff. This is a blood sport for some of these bozos in Washington. There is also a lot more good news than gets reported, because polarization is what draws viewers and readers. Some of the left’s bad guys are trying to get some collaboration going. And some of the right’s bad guys are actively pursuing collaboration.

But not enough people are asking, “What do we want our children growing up to be, and be able to do?” Even most of the hard-ass business people would say, “We’d like our children to be tax-paying, law-abiding citizens who will contribute to the quality of life.” They don’t just want workers who will show up on time and do what they tell them to do. But we don’t have that conversation. If we were asking these questions, the next question would be, “What activities at the school point in that direction?” I think if you ask that question honestly, the answer will be, “Working together whether it’s as a team, or projects in class with students.” That promotes that kind of behavior and growth. I know President Obama has a lot of other stuff to do, but I thought that he’d lead that kind of a conversation.

MJ: How should President Obama lead the conversation?

JM: I don’t have a great deal of faith in Washington. I think it could happen at the state level. Maybe a state like Tennessee, Delaware, Rhode Island. Perhaps these states could have a conversation, and here is what I would do: Let’s have a point system for every school, and let’s say to stay open a school has to be at 15 points. Then you tell the community, “You get points for having vibrant programs.” So you ask, “What programs do you want, community?” Some might want project-based learning. Some might want 30 minutes of recess. Others might say they want uniforms, more languages, more science, more art. But that wouldn’t be enough to keep it open. The school also has to score on the state test. It has to score at least three points out of say total of five. So, you couldn’t get the maximum score without passing the tests, and you couldn’t stay open just because you have all of these great, touchy-feely programs. I think in this system, you have both “trust” and “verify.” You are asking the community for their input, and asking the school to pass a test. But it would take leadership to say, “Let’s put aside labels. What kind of experiences do want our kids to have?”

MJ: What do you think is an appropriate level of parent engagement? How can parents avoid becoming high-pressure helicopters?

JM: Race to Nowhere documentary was a grim, unrelenting movie about that and it was heartfelt. But I think that the situation it describes probably applies to about 10 percent of our kids. I think with 90 percent of our kids we don’t ask enough of. I think schools have made a huge error in pushing parents away. Just leave your kid and money at the door. Parents are the primary educators of their kids. Schools have these artificial structures, like parent involvement committees. Instead, what I think we should do is, starting in kindergarten, the homework should involve parents. The first grade teachers could say, “We’ll be learning show and tell. I want you to go and ask your parent or grandparent to tell you about the first movie they remember seeing. Next week go ask your guardian about the first time they took a train and write about it a paragraph.” The parent is going to want to read that. They’ll want to see what the teacher said about it. The kids are more engaged because it relates to their lives. You are creating this natural quilt where the parent understands the connection to his or her child’s learning. And the teacher gets to know the parents. I often hear from teachers that parents don’t care. Some teachers need to acknowledge a partnership.

MJ: What’s on your mind with the new school year approaching?

JM: People are predicting the worst. All of these teachers are being laid off, and classes are getting larger. I was blogging this morning about how I hope teachers can get beyond cursing the darkness and cursing their enemies. And this denigration of teachers has got to stop. It’s really why I wrote the book.